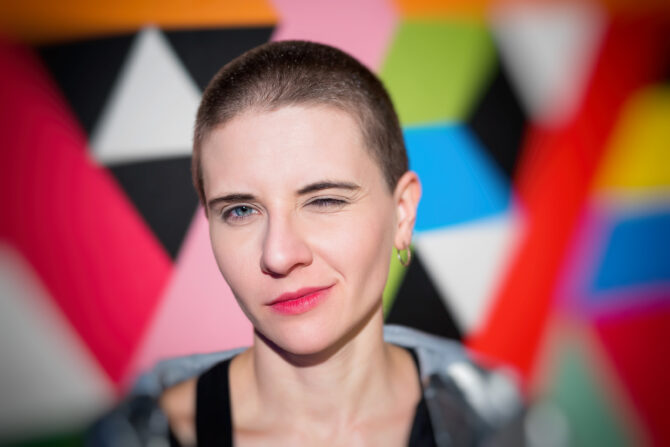 Here, we break down everything you need to know about she/they pronouns and the accompanying flag.

RELATED: Why some people use she/they & he/they pronouns

What Are She/They Pronouns?

She/they pronouns are “rolling pronouns” or multiple pronouns that can be used alternately or shift over time. While anyone can adopt rolling pronouns, they are most typically used by transgender and non-binary folks who want to affirm their connection to womanhood or femininity. This is particularly true for non-binary or transgender people who identify as lesbian or assigned female at birth (AFAB) and non-binary people who identify as bisexual or pansexual.

Writer and podcast host Ada Powers describes it best: “I identify as a woman, but also as nonbinary. I don’t feel womanhood tells my full story, but I’m not fully divested from it, either.”

If this all sounds a bit confusing, let’s take a few steps back to explain some terms.

Non-binary is a term used to describe people who don’t strictly identify as either male or female.

For most people, gender is black or white or, in other words, binary. But for non-binary individuals, gender is more like a spectrum or a range where they can identify somewhere between male and female or even outside of the spectrum altogether. Some non-binary people identify as having more than one gender identity – this is called bigender or polygender.

Genderfluid people have a gender identity that is in a constant state of flux. This means that they may identify as more male one day, more female on another, and agender or genderless the next.

Bigender people identify as having two genders at the same time.

How To Use She/They Pronouns

It can be confusing to use rolling pronouns at first, especially because different people have different preferences for how they’re used. Some people prefer to rotate or alternate their pronouns within a single sentence or from sentence to sentence. Others may have a preferred pronoun set depending on the day – this is especially common for genderfluid people whose gender identity fluctuates.

So, how do you get them right? As a rule of thumb, always ask someone what their pronouns are and how they want them to be used. Ask if they have a preferred pronoun or if you can alternate between the two. If you ask politely, most people will gladly explain their pronouns – and they’ll especially appreciate the time and effort you took to get their pronouns right.

?-??she/they lesbian flag!
?: for lesbians who use she/they pronouns, exclusively or not 🙂
?-??i hope you like it, anon! pic.twitter.com/tMbLVwkrbv