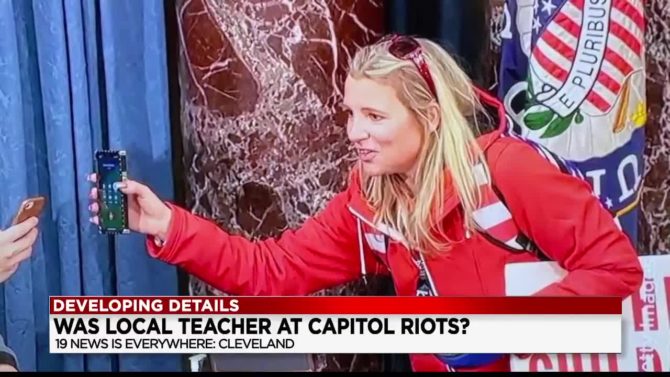 A high school therapist from Cleveland, Ohio who quit her job to become a global fighter against pedophilia was arrested by the FBI this morning after being photographed inside the Senate chambers during last week’s deadly insurrection.

Christine Priola is, er, was an occupational therapist for the Cleveland Metropolitan School District prior to last week’s breach of the U.S. Capitol building. Now, she’s facing federal charges for her alleged role in the failed coup.

According to documents filed in United States District Court, the 49-year-old is charged with knowingly entering or remaining in a restricted building, violent entry and disorderly conduct on Capitol grounds, and unlawful activities on Capitol grounds.

FBI agents showed up at Priola’s house earlier today to take her into custody. Days earlier, she had submitted a letter of resignation to her employer, saying she was changing career paths to focus on exposing human trafficking and pedophilia around the globe.

Also, she didn’t want to take the COVID-19 vaccine in order to return to in-person school. 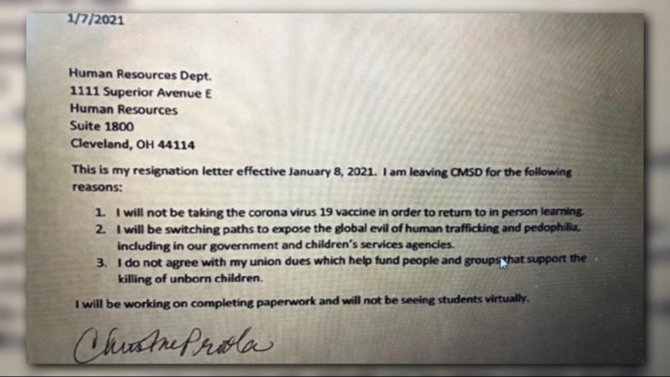 The letter came hours after Priola was doxed on social media for allegedly storming the U.S. Capitol and terrorizing lawmakers in an attempt to overturn the presidential election and overthrow the government.

The FBI was able to determine she was at the insurrection through widely shared photographs, video footage, and by tracing her electronic devices.

In a statement, a spokesperson for the Cleveland Metropolitan School District said, “While CMSD deeply believes in the right of any individual to peacefully protest, as many did on the Capitol plaza on Wednesday afternoon, the District deeply condemns the actions of those involved in the riots inside the Capitol and on the Capitol grounds.”

“The right of peaceful protest, as protected by the first amendment, is a foundation of our democracy. The forcible takeover and willful destruction of our government is not.”