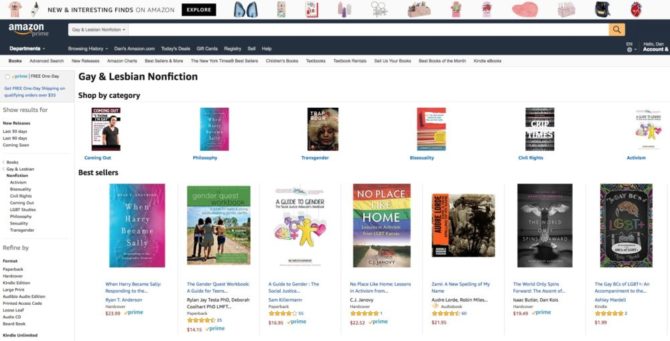 If you were a gay or transgender youth browsing Amazon, the world’s largest retailer of books, and decided to venture into the Gay and Lesbian nonfiction section–perhaps your school library doesn’t carry much in this department, maybe you don’t have a friend or family member knowledgeable enough to aim you towards a good read–you’d first be offered a title relating to the “transgender moment.”

Then you might see the endorsement of “best-seller”–it’s listed at #1–and be curious enough to find out more.

But diving into the listing page for Ryan T. Anderson’s When Harry Became Sally: Responding to the Transgender Moment, you would eventually start to pick up on something strange: The book, though it first presents itself as having “thoughtful answers” to questions and misconceptions around being transgender, has another, decidedly anti-trans worldview it’s peddling. 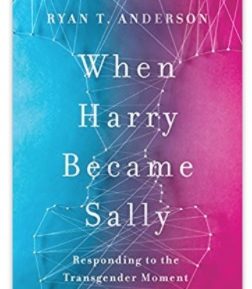 Per the book’s summary:

Everyone has something at stake in today’s debates about gender identity. Analyzing education and employment policies, Obama-era bathroom and locker-room mandates, politically correct speech codes and religious-freedom violations, Anderson shows how the law is being used to coerce and penalize those who believe the truth about human nature. And he shows how Americans can begin to push back with principle and prudence, compassion and grace.

And if there’s any room at all to doubt the real point Anderson is getting at, he writes, “Despite activists’ best efforts to put up a unified front, Harry cannot become Sally. Activists’ desperate insistence to the contrary suggests that the transgender moment is fleeting.”

Anderson’s last book, Truth Overruled, takes on the Supreme Court’s ruling on marriage equality. Religious liberty and “marriage culture” itself were gravely threatened, he argues, by the Supreme Court’s decision to allow two people, regardless of gender, to marry one another.

So the guy who has decided that same-sex marriage is ruining straight people’s lives has also decided that it is impossible for someone to be transgender. Got it.

It’s one thing for Anderson to engage with his close-mindedness in order to profit off of other people’s close-mindedness, but does Amazon have a duty to its customers to curate harmful pseudo-science out of its book offerings in this section?

There may be an appropriate place for this unfortunate book somewhere on Amazon’s marketplace, but the #1 slot in the Gay and Lesbian section is not that place.