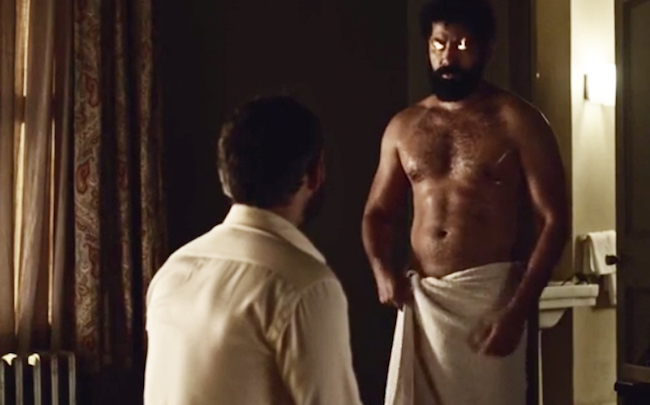 This week, the series American Gods — based on Neil Gaiman’s Hugo and Nebula Award-winning novel — aired what’s being called “the single hottest and most pornographic gay sex scene ever put on mainstream television.”

The fantasy series follows gods of various ancient cultures as they face off with newer, American-born gods like Technology, Media, Celebrity, etc.

Related: Starz tackles the “hottest gay sex scene” to ever air on television

In Gaiman’s novel, a Muslim man named Salim (Omid Abtahi, Sleeper Cell) immigrates to New York City, where he winds up selling knick-knacks. He meets a Jinn (a spirit in Muslim mythology able to appear in human and animal form) taxi driver, and the two take off to a hotel room to have sex.

You can see some NSFW photographs from the scene here, courtesy of Towleroad. hereThere are some more stills over .

Executive Producer Bryan Fuller and cast members Abtahi and Mousa Kraishbtahi discussed the controversial episode with Entertainment Weekly, and you can watch that clip below:

The scene — which wasn’t included in the first cut of the episode — needed to be realistic, according to Fuller.

Talking to Vulture, he quipped

“I was like, ‘Okay, unless he has a 12-inch, candy-cane cock and can fuck around corners, his dick’s not getting in him. So you guys need to go back and figure out where holes are.”

I can't talk enough about that sex in American Gods, how gorgeous it was both visually and emotionally and how it was really truly hot

AMERICAN GODS HAS A GAY SEX SCENE AND NEITHER OF THE MEN ARE WHITE. WE ARE BLESSED IN THIS HOME

Gay sex with a genie…American Gods is wild

Me, waiting patiently for someone to upload the Jinn/Salim sex scene from American Gods ?? pic.twitter.com/wEQjIRaO1R