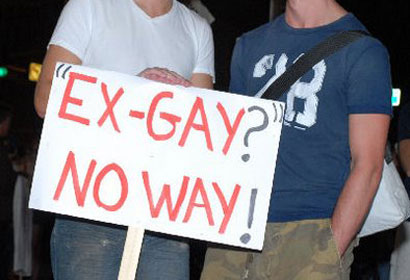 The testimony about what went on inside the organization JONAH in 2015 was the stuff of nightmares.

An acronym for “Jews Offering New Alternatives to Homosexuality,” the organization promised a cure for those struggling with “same-sex attraction.” In a first-of-its-kind lawsuit brought against the Jersey City, N.J.-based clinic, former patients of JONAH said the prescribed treatment was akin to torture. For instance, men who sought out the clinic searching for answers were instead forced to beat a pillow, scream at it, and pretend it was their mother.

According to the Southern Poverty Law Center (SPLC) Deputy Legal Director David Dinielli, one survivor of the JONAH program was forced to pummel his parental surrogate “until his hands bled.”

“Other clients were required to reenact childhood trauma, including childhood sexual trauma, under the theory that the reason people become gay is that they’ve suffered some sort of trauma in childhood that is thrown them off the normal path towards heterosexuality,” Dinielli tells Queerty. “Some were required as a part of the program to disrobe in front of the counselor.”

JONAH also operated a retreat which promised a tranquil, summer-camp-like atmosphere. Instead, patients were compelled by counselors to strip naked and shower together. Some treatments involved “healthy touch” sessions with older counselors, in which they would sit and embrace for long periods of time.

In December 2015, New Jersey Superior Court found that JONAH—which was later renamed as Jews Offering New Alternatives for Healing to make it sound more palatable—had violated the state’s consumer fraud law. A jury unanimously ordered the center to cease operation. In addition to paying $72,400 in damages and legal fees to the plaintiffs, it was given six months to liquidate its assets.

However, an injunction filed against in the Superior Court on Wednesday claims JONAH never complied with the order to shut down.

According to Dinielli, the founders of JIFGA have “continued to connect people who are ‘struggling with SSA’ with counselors across the country and to collect fees in connection with that.”

“JONAH has not done what it had promised,” he says in a phone interview. “Instead it’s simply donned a new name and continued in secret. This was a really shocking finding and disappointing to the plaintiffs and the lawyers, given the efforts we undertook to bring these practices to a stop.”

SPLC’s motion urges the court to institute “contempt proceedings” against the new organization, which could result in $3.5 million paid out to plaintiffs in legal fees.

The case is exactly a year in the making. In March 2018, the Montgomery, Ala.-based civil rights group began digging into JIFGA’s tax filings to trace its suspected connections to JONAH. However, the organization was hardly hiding its origins: JIFGA had the same phone number as its predecessor, and its office was even in the exact same location.

J. Seth Anderson, whose husband was one of the plaintiffs in the previous lawsuit against JONAH, says the group must “be held legally accountable for this.”

“Unfortunately I think this example shows how difficult enforcing not only laws but court orders can be,” Anderson tells Queerty. “A jury found JONAH liable for consumer fraud and unconscionable business practices in 2015, yet they continued to operate by peddling the same fraudulent product under a different name.”

New Jersey is one of 15 states (and D.C.) that has taken action at the statewide level to ban conversion therapy, a list that includes California, Connecticut, Delaware, Hawaii, Illinois, Maryland, New Mexico, Nevada, New Hampshire, New York, Oregon, Rhode Island, Vermont, and Washington. Colorado is poised to become the 16th after a bill outlawing orientation change efforts passed its state legislature earlier this week. Openly gay Gov. Jared Polis is all but guaranteed to sign it.

However, loopholes in the legislation continue to persist. Not a single state has banned “gay cure” treatments from being performed on individuals over the age of 18.

Sam Brinton, head of advocacy and government affairs for The Trevor Project, calls conversion therapy “abusive,” “fraudulent,” and most of all “discredited.” It has been condemned by virtually every leading U.S. medical and mental health group, including the American Medical Association and the American Psychological Association. Last year the United Nations called for a global ban on the treatment, calling it “barbaric.”

The national suicide hotline and support group pledged its full support in ensuring JONAH is forced to shutter once and for all.

“The Trevor Project will do everything in our power to support our allies in the court of law, and we will lead the charge in the court of public opinion to show the truth of conversion therapy and its profound harm to LGBTQ youth,” Brinton says.

But despite Dinielli’s claims the conversion therapy group is merely “JONAH in new clothes” and overwhelming evidence linking the two organization, JIFGA says “categorically denies” the allegations. Its attorney, Michael Laffey, tells the New Jersey Star-Ledger that the basis of SPLC’s motion for an injunction is “not true.”

Following this week’s court filing, JIFGA will now have an opportunity to submit a written response—to which SPLC and its co-counsel will be permitted to respond.

Oral arguments in the case could begin as soon as next month.

While the Superior Court weighs the case against JONAH, the right-wing legal firm Liberty Counsel has requested the U.S. Supreme Court take the issue out of New Jersey’s hands. It filed a petition to the nation’s highest bench in March claiming the Garden State’s ban on orientation change efforts—which was passed in 2013—violates the “free speech” rights of people of faith.

“This is government interfering with the private counseling relationship… without considering facts and individual people,” claims Liberty Counsel Founder Mat Staver. “[…] This is a fundamental violation of autonomy. There is no other area of counseling this happens.”

The Supreme Court has yet to respond to the organization’s request to intervene.