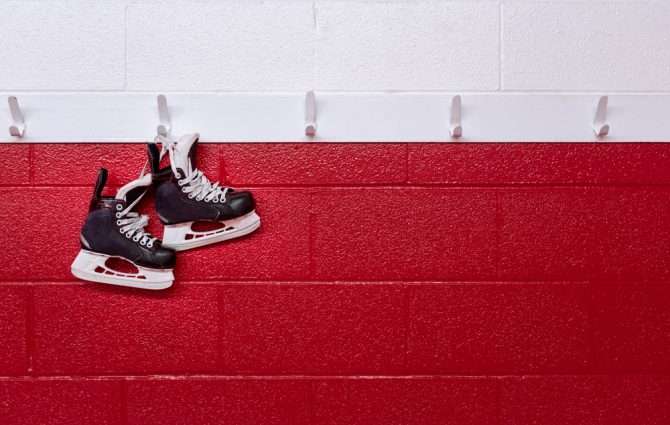 One week after former Chicago Blackhawks star Kyle Beach came forward to claim he was sexually assaulted in 2010 by the team’s then video coordinator, Brad Aldrich, and that his complaints were ignored by leadership, more reports showing the culture of homophobia happening on the team at the time have been released.

A locker room photo from Stanley Cup celebrations taken in 2010 shows Blackhawks stars Jonathan Toews and Patrick Kane holding up the Stanley Cup. Behind them, a whiteboard displays an opponent’s name, Philadelphia Flyers defenseman Chris Pronger, with the words “is Gay” scribbled next to it and circled in red pen.

Boy that 2010 Chicago Blackhawks locker room was a real laugh riot. Apparently they thought Chris Pronger was gay. .@NHLBlackhawks hope The Stanley Cup was worth it. #KyleBeach thank you for exposing this. pic.twitter.com/xGRYVmuzCo

The photo was reportedly taken just a few weeks after Beach complained about Aldrich, but before any action was taken in the matter.

According to an independent investigation conducted by the Chicago law firm Jenner & Block, Beach’s report was ignored to avoid bad publicity amid the ongoing playoffs. After the playoffs, HR told Aldrich he could either resign or undergo an investigation. He chose to resign, but not before negotiating a handsome severance package that included a playoff bonus and several months’ salary.

After Jenner & Block’s report was released, Blackhawks president of hockey operations and general manager Stan Bowman resigned. Joel Quenneville, who was head coach for the Blackhawks at the time, also stepped down from his current job as head coach of the Florida Panthers after initially claiming he didn’t know anything about Beach’s 2010 allegations.

A mascot did more for Kyle Beach than the Blackhawks’ own captain https://t.co/DLAFQBpSvR

“I want everybody to know in the sports world and in the world that you’re not alone. That if these things happen to you, you need to speak up. Because there are support systems.”

Beach followed that up with a statement to his Instagram page. Read it below.