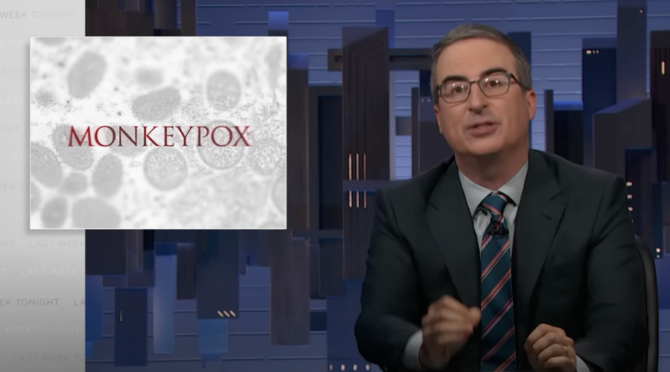 Talk show host John Oliver dedicated the bulk of his Sunday night show to covering monkeypox, criticizing both the public health response rollout and how some on the Right are discussing it.

Oliver singled out Rep. Marjorie Taylor Greene during the Last Week Tonight segment, pointing out the “obvious dog-whistle” homophobia in her comments on the disease.

In one clip Oliver played, Greene says, “Of course, monkeypox is a threat to some people in our population, but we know what causes it. It’s basically a sexually transmitted disease, so it doesn’t affect most of the population. People just have to laugh at it, mock it, and reject it….It’s another scam.”

“Obviously, that is ridiculous,” Oliver responded. “If the way to get rid of something awful was for people to laugh at it and mock it, that woman clearly wouldn’t be in Congress.”

Oliver also showed a tweet Greene posted in July that said, “If monkeypox is a sexually transmitted disease, why are kids getting it.”

He called it “an act of obvious dog-whistle bigotry, suggesting gay people are a danger to children,” and he’s not wrong.

Later that month, Greene said on her webcast that, “Monkeypox is all the rage, it is the hottest thing going in Washington, D.C. right now.”

Related: He loved his Florida trip. Then the monkeypox blisters appeared.

She continued: “You are not supposed to talk about how it really gets spread around but we are going to just go ahead and let you know.

“You have to believe that if monkeypox was spreading largely through heterosexual sex things would be drastically different,” Oliver said. “It is not homophobic to acknowledge who is currently most affected, which is gay and bisexual men, sex workers, and people who participate in sex with multiple partners. What is homophobic is when you blame or shame the people who are suffering or when you decide you don’t need to care about this because you don’t see their lives as valuable or their suffering as consequential and that is where there are strong echoes of  the AIDS crisis in some of the discussion around monkeypox.”

Watch the full segment below, which also puts into perspective just how poorly the U.S. handled the initial outbreak: