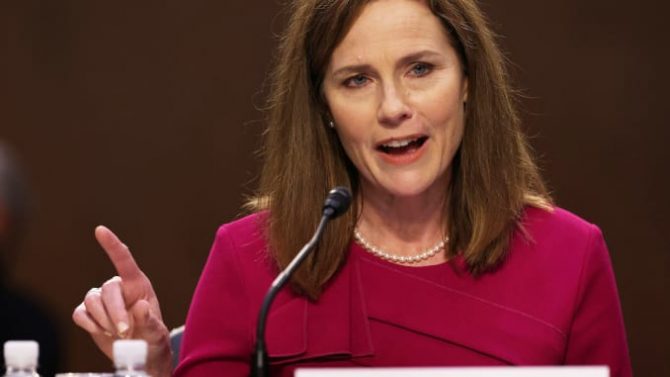 When Senator Dianne Feinstein asked the judge whether she thinks same-sex marriage should be protected under the law, Barrett refused to answer the question. Not only that, but she implied being LGBTQ is a choice by repeatedly using the phrase “sexual preference” to describe orientation.

Feinstein asked Barrett specifically about the DOMA and Obergefell rulings, saying: “Both decisions were decided by a 5-4 margin. Justice Ginsburg was in the majority. Justice Scalia dissented in both cases. You said in your acceptance speech for this nomination that Justice Scalia’s philosophy is your philosophy. Do you agree with this particular point of Justice Scalia’s view that the U.S. Constitution does not afford gay people the fundamental right to marry?”

To which Barrett offered a very long-winded response that could have just as easily been summed up with two words: “No comment.”

If I were confirmed, you would be getting Justice Barrett not Justice Scalia so I don’t think that anybody should assume that just because Justice Scalia decided a decision a certain way that I would too. But I’m not going to express a view on whether I agree or disagree with Justice Scalia for the same reasons that I’ve been giving. Now, Justice Ginsburg, with her characteristic pithiness, used this to describe how a nominee should comport herself at a hearing. No hints, no previews, no forecasts. That had been the practice of nominees before her but everybody calls it the Ginsburg rule because she stated it so concisely and it’s been the practice of every nominee since. So I can’t, and I’m sorry to not be able to embrace or disavow Justice Scalia’s position but I really can’t do that on any point of law.

Judge Amy Coney Barrett: "Justice Ginsburg…used this to describe how a nominee should comport herself at a hearing 'No hints, no previews, no forecasts'…everybody calls it the Ginsburg Rule."

Feinstein responded by calling Barrett’s response “too bad” as many Americans would like to know her stance on LGBTQ equality.

“I understand you don’t want to answer these questions directly,” Feinstein continued, “but you identify yourself with a Justice that you, like him, would be a consistent vote to roll back hard fought freedoms and protections for the LGBT community. And what I was hoping that you would say is that this would be a point of difference where those freedoms would be respected and you haven’t said that.”

To which Barrett gave another very long-winded response that ultimately ended up being a whole lot of nothing.

In addition to citing Antonin Scalia as one of her mentors, Barrett has close ties to the antigay hate group Alliance Defending Freedom, where she has given five paid speeches over the past decade. The group’s leader, Michael Farris, attended her nomination ceremony on September 26 that resulted in several members of the White House, including Donald Trump, contracting coronavirus.