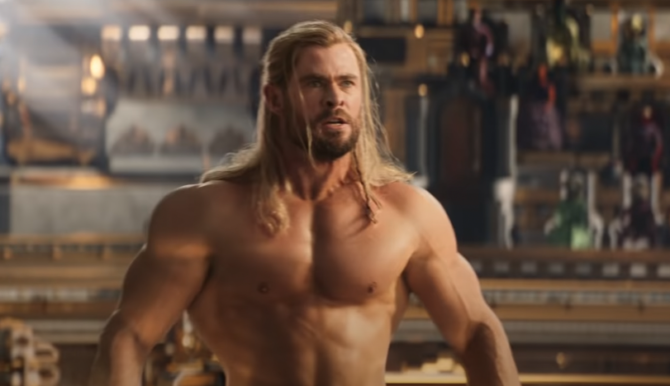 When the first official teaser for Thor: Love & Thunder—the Marvel Cinematic Universe’s fourth Thor-lead film—dropped last month, it had fans in a tizzy over its alleged queerbaiting, with many theorizing that it could be hinting at a relationship between Chris Hemsworth’s titular God Of Thunder and Star-Lord, played by Chris Pratt.

Though Pratt’s (confirmed bisexual) Guardian Of The Galaxy is only briefly glimpsed in the latest trailer, there’s still plenty of canonized queer characters to be found, as well as theatrical imagery and other showy choices that have us hoping this could actually be Marvel’s gayest movie yet.

After all, it does come from the mind of writer/director Taika Waititi, who gave us Cate Blanchett as an antlered drama queen in his last MCU movie, in addition to HBO Max’s goofy pirate comedy, Our Flag Means Death, which surprised us all by becoming one of the queerest shows of the year.

Just how gay is Thor: Love & Thunder? The movie—which also stars Natalie Portman, Tess Thompson, Christian Bale, and Russell Crowe—doesn’t hit theaters until July 8, so, until then, we’re left to scavenge the new trailer for hints of queerness, reading too far into things and blowing small moments way out of proportion, as we are wont to do.

Take a look at it for yourself, and then read below for our breakdown of all of the trailer’s gayest moments.

The Return Of Korg

The trailer’s first spoken dialogue comes from none other than Korg, the rocky Kronan voiced by writer/director Taika Waititi, who stole every single scene in Ragnarok. While the beloved Korg is canonically gay in the Marvel comics, Waititi already broke fans’ hearts when he shared in a recent Instagram Live that the character’s sexuality would go unaddressed in the new film. Alas, we’re happy just to see Korg back in action!

We’re given even more of a look at Portman’s Jane Foster in all of her mighty Thor glory, guns a’blazin’. Many of the trailer’s laughs come from the awkward dynamic of these exes who haven’t seen each other in three, four years… or maybe it was eight years, seven months, and six days. However long it’s been, Jane was clearly the top in this relationship.

One character who has been confirmed for some queer action in Love & Thunder is none other than Valkyrie, played by the luminous Tessa Thompson, who is openly bisexual and has been calling for more LGBTQ representation in the Marvel films since her initial casting announcement. If you’ll recall, at the end of Ragnarok, Valkyrie is appointed the new leader of the Asgardians, so we’re eager to see her running the show. But even more exciting is the fact that Thompson, Waititi, and Marvel exec Kevin Feige have all hinted that there may be a queer love story in Valkyrie’s future, with Thompson sharing at Comic-Con in 2019 that, “As new king, she needs to find her queen.”

Rainbows have always been an important part of Marvel’s Asgardian lore, ever since they decided to make the realm-connecting Bifrost bridge look like Mario Kart‘s Rainbow Road. In Love & Thunder, we see Thor’s souped up new chariot leave a rainbow trail behind wherever it goes, like a Viking Nyan Cat. Better still, the chariot is pulled by two giant cosmic goats, who go by Toothgnasher and Toothgrinder in the comics. Don’t ask how or why, but those goats are queer icons.

In one of his trademark full-body transformations, Christian Bale looks downright terrifying as Love & Thunder‘s big bad, Gorr The God Butcher. We were ready to write him off as another boring, bloodthirsty hetero villain, but then his all-white aesthetic reminded us of something: You know how, for Pride Month one year, the typically colorful Skittles ditched the rainbow for white candies in a confusing symbolic gesture we’re still not sure we understand? Well, maybe that’s Gorr’s deal, too—maybe he’s the proudest of them all! Something to think about.

We’re pretty certain this is Jane and Thor linking pinkies, hinting at a rekindling of their old flame, but that doesn’t take away from the fact that this could basically be a shot from Heartstopper if it weren’t for the capes and superhero-god gloves. Queer or otherwise, Waititi is definitely bringing the romance to the MCU.

Zeus Is The God Of Camp

Another big addition to the cast is Russell Crowe, whose take on the Greek god of thunder is decidedly camp. With a flashy gold chest piece and hair that looks like it spent the morning in curlers, there’s something very flamboyant about this interpretation of Zeus. In this brief glimpse, Crowe definitely seems to be playing him for laughs, so we’ll be curious to see how he fits into the story of the movie and the larger MCU. If nothing else, this Zeus is responsible for the most important shot of the trailer…

And flick! The pièce de résistance of the trailer—and quite possibly all of Love & Thunder—is the final beat where Zeus attempts to rid of Thor’s disguise, flicking off all of his clothes in the process, leaving the impossibly ripped Hemsworth in nothing but shining gold chains. In a wider *rear* shot, we see that Thor is truly wearing nothing at all, a digital blur masking his exposed butt. Wait a minute, are we about to actually see Hemsworth cheeks in Love & Thunder? Now we’re actually going to have to go to the theater to find out! Well played, Marvel.

Finally, we’re also gifted with a hilarious reaction shot of Valkyrie and Jane enjoying the show. They’re clearly taking in the sights, but the repartee between Thompson and Portman is a lot of fun. And, are we reading into things too much, or does their grape-snacking feel coded in some way? Maybe Jane’s the queen Valkyrie’s been looking for all along, eh? The rumors start here!