Andrew Ahn made a celebrated debut steamy feature, Spa Night, a sensitive depiction of an 18-year-old who takes a job all-male spa to help support his financially-struggling immigrant parents, and the unexpected awakening his own hidden desires and begins to discover his true self.

The talented Ahn’s new film, Driveways, is the story of young Cody (played by Lucas Jaye), a pre-adolescent boy taken by his mother Kathy (Hong Chau, Jackie on Big Little Lies) to sell the house of his dead hoarder aunt. As mother and son struggle with finances and a house full of junk, Cody befriends Del (Brian Dennehy), an aging army veteran mourning his dead wife. Del and Cody form an unlikely friendship as one faces a life uncertain, and the other faces its end.

Driveways is opening at the Tribeca Film Festival.

Andrew Ahn afforded Queerty a few minutes to chat about the film and his inspirations.

How did this script come to you?

Symbolic Exchange, the production company, had been working with the writers Hannah Bos and Paul Thureen to develop the script. Joe Pirro, one of the executives there, had seen Spa Night and felt that there was an interesting connection in the material that I might respond to. He sent me the script, I read it and just thought it was so beautiful. I read it the first time in a coffee shop, and thought, I should read this on my own. I went home, I read it and cried. It was so subtle, and the beauty of it, and the relationships—it was something that I hadn’t seen before. Usually, I really like to write and direct, but this just felt like such an opportunity. I really wanted to direct it.

There’s the old showbiz adage to never work with kids, animals, or plunging necklines. Yet in this film, your main character is a child, and you cast him with an actor—Lucas Jaye—who had never acted in a film before. And he carries the entire film.

Lucas had done some acting, but never in a film. When he sent in his tape and our casting director, Amy Kaufman, forwarded the tape to me, I could just sense that he was the one. There was this old soul quality to him trapped in a small body. I really responded to how he felt like someone…well, that he felt like me as a kid. There’s a sensitivity to him. We met him in the callback. He was the only actor that I saw in LA for the role. Then we did a chemistry read between him and Hong [Chau] and they just played so well off each other. She helped him feel really comfortable and made him be spontaneous. There was no doubt in my mind that he was going to carry the film on his shoulders with such ease. I really just thought he was so, so talented that I wasn’t worried.

If I hadn’t found him, I would have been freaking out. It is a scary thing. We’d already narrowed down the talent pool because I really wanted to cast Kathy & Cody as Asian-Americans. I was so excited to work with him. I think it really shows in the movie.

What was your approach to directing him?

We really wanted to capture a certain sense of spontaneity, so actually, Lucas didn’t read the entire script. Basically, right before shooting the scenes we were working on, we’d look at the script together. He’d prepare it for maybe 20-30 minutes, then come on set. It’s a testament to how smart he is that he could do these scenes with very little preparation and it would capture this kind of spontaneous, live quality that I really wanted in his performance. That’s something I wouldn’t normally recommend.

I think with a lot of actors, they want to be prepared, and they want to analyze the character. For me, the reason why I cast Lucas was that I could see kind of within his nature as Lucas that there was a commonality with Cody. So I didn’t need him to do a lot of character work. I just needed him to be present. That’s something that we created an atmosphere on set to make that happen. We didn’t want to over prepare anything. In some ways, I could talk to him like I would an adult actor about the situation, or where his character was at, and he would totally absorb it. It would show up in the next take quite organically.

Hong’s so nuanced in the film.

There’s so much tenderness to her, but also this brittleness that I really love. It’s a real credit to the producers, Joe Pirro and James Schamus, when I asked them, “What if Kathy and Cody are Asian?” they were excited about that in a way that, if I’d had this conversation with other producers, they’d say, “It’s not a great idea.” It’s a sign that people want to tell stories about people of color in a way they never have before.

You also work with a pair of heavy-hitters in this movie: Brian Dennehy and Christine Ebersole. Both of them have Tony awards. They’re legendary on stage.

I will say that both Christine and Brian really understand the role of the director. I think that coming from a stage background they really seem to value the director. They really trusted me. They wanted my feedback. It wasn’t like an actor who would come on set and think they knew exactly how to do everything. They really wanted to have a conversation, to do the work. It was such a pleasure working with them. Brian was so gung-ho for everything, and he’s 80 now. This is a demanding role with a lot of scenes. This was an indie budget schedule. We had to shoot a lot and we had to shoot fast. And he was so game. I think that’s because he really loved the material. He really loved working with Lucas. I remember we were shooting an emotional scene between Cody and Del. We shot Brian’s coverage first, then we shot Lucas’ coverage. Brian was so in love with what Lucas was doing, and so inspired, that he came up to me later and said, “This kid is so good, he’s doing so much. I want to do my side over again.” For me, the fact that this young actor was inspiring Brian Dennehey—that’s a gift. He wasn’t going to phone this in. He was really trying and open to inspiration from a young scene partner. That, to me, is the sign of a real pro.

One of the most intriguing themes in this film is that both adult figures in this film, Kathy & Del, are people living with horrible guilt and regret. Del disowned his daughter. Kathy wasn’t there for her sister. Themes of guilt are also prominent in Spa Night. What draws you to themes of guilt?

For me, what I find really dramatic isn’t necessarily the plot. It’s not necessarily what’s literally happening. Often what I find more dramatic is how we feel about things, things we can’t control. Things that have happened that we wish we could do a different way. That’s interesting to me because it’s such an internal struggle, yet film is such an external medium. It’s all about what you can see and hear. I think that that kind of tension between the internal struggle in an external medium is why I’m so fascinated by it. I think Hannah and Paul’s script, there are these beautiful moments where we see the externalization of this guilt. Del’s final monologue is an epic piece of writing. What I love about Brian’s performance in that scene is that it’s like he’s still holding something back. There are other tensions he’s holding on to. So I love the drama on the inside. It will always feel slightly elusive, but that’s why I search for it. 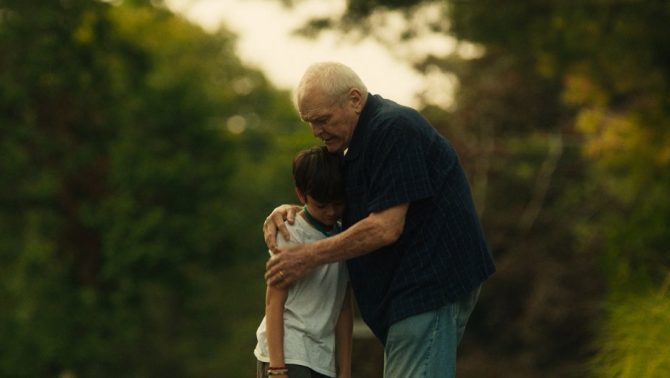 Queer themes obviously play a role in your previous film, Spa Night. They play a role here too, though in a different way. Obviously, Del has a gay daughter who appears late in the film. Cody also seems drawn to homoerotic manga, hinting that he may be gay too. In your mind, is he?

It’s so interesting. In many ways, I think if the script were directed by a non-queer director, some of these subtleties wouldn’t exist. But because I am a queer director, I am a gay man, some of these subtleties come to the surface. My feeling is that Cody is still a kid and he’s still figuring things out. He’s a kid in the way that I was a kid, in that he could very well grow up to be gay. He could grow up to be transgender. For him, there’s a future of opportunity. But I do think that what he is showing you in this moment of his life is that he’s sensitive. There’s a sensitivity to him beyond his years. I think that is something that many queer people have just because of how we feel like outsiders. That sensitivity is something I really wanted to explore and express in different ways. I kind of hope he grows up to be queer. It would be so great that this moment in his life helped him really feel excited about his future queer life. But it’s also not up to me.

Both of your movies, Spa Night and Driveways, have somewhat ambiguous endings. What impression do you want to leave for an audience?

I think with both Spa Night and Driveways, the story isn’t necessarily about the plot. The story is about these characters. Not tying up the plot in a super-nice bow, in a really satisfying way is just to kind of orient the audience. It’s about these people. Both films have a satisfying ending, it’s just they’re not done in the most traditional way. I think what it allows is an audience to really sit with the film and not just digest it and be done with it. It’s a film that stays with you, that you’re curious about, that you wonder what happens to these people.

That’s what I love about great cinema: it lasts.

Driveways opens at the Tribeca Film Festival. A nationwide rollout will follow.