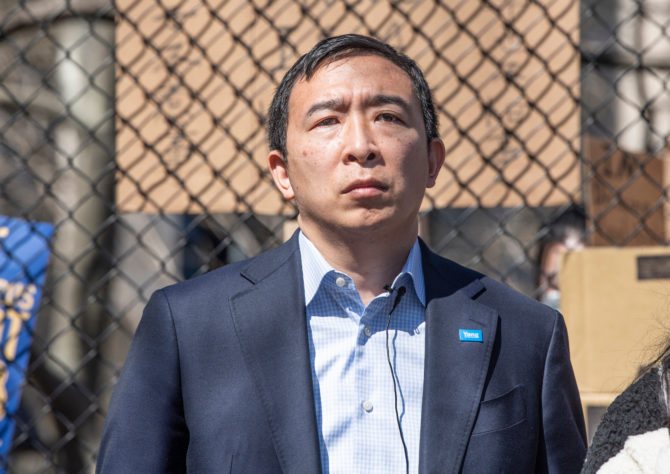 Well that didn’t go as planned.

New York City Mayoral candidate and former presidential candidate Andrew Yang sought the Stonewall Democratic Club of New York’s endorsement Thursday night, and not only did he not get it, he wound up offending the group’s members.

Trying hard (like, really hard) to appeal to the LGBTQ Democratic group, Yang seemed more focused on proving he knows gay people and where they drink in NYC than he was discussing relevant policy.

“Well, first, let me say that if I go to Cubbyhole, I think I’m going to be accompanied by at least one of my two campaign managers who are both gay,” he said in the video discussion. “So there’s like a lot of, you know, familiarity with, with the community, at the head of my campaign leading it.”

“He came across like he was a tourist in New York and said he wanted to visit a gay bar,” the LGBTQ Democrats’ club president Rose Christ told Politico.

Some also took issue with the way the businessman kept repeating the phrase “your community.”

“I genuinely do love you and your community,” he said, according to a partial recording of the meeting reviewed by the New York Times. “You’re so human and beautiful. You make New York City special. I have no idea how we ever lose to the Republicans given that you all are frankly in, like, leadership roles all over the Democratic Party.”

“We have, like, this incredible secret weapon,” he continued. “It’s not even secret. It’s like, we should win everything because we have you all.”

“He kept calling us ‘Your community,’ like we were aliens,” club member Harris Doran told the paper.

“When I see a candidate come in just with [The Office’s] Michael Scott levels of cringe and insensitivity, it either tells me Andrew Yang is in over his head or is not listening to his staff,” Alejandra Caraballo, who also attended the meeting, said. “Those are both radioactive flashing signs that say he is not prepared to be mayor of New York.”

Here’s what folx are saying about it on Twitter:

Oh man Andrew Yang at the Stonewall endorsement meeting was an inexperienced, ill informed joke who keep telling us his campaign manager was gay over and over and naming one gay bar over and over. If you are thinking of voting for him, I beg of you, god help us, don’t.

As I said before, Andrew Yang is NOT qualified to the Mayor of New York City.

I'm a gay dude who does more than go to gay bars and go shopping. Don't get me wrong, I enjoy those things immensely, but I'm not a character from Will & Grace and don't particularly enjoy being treated as one. https://t.co/lxgQwwjyPe

Andrew Yang trying to get gay New Yorkers to vote for him pic.twitter.com/nnyDA9xPJQ

As a gay Asian I am begging Andrew Yang to stop talking https://t.co/qF2yjKelfP

Will continue never going to an indoor bar again if there is even the remote chance I will run into Andrew Yang at a gay bar.

When Andrew Yang thinks the gays are only interested in whatever happens at Pride and gay bars, his true colors really do show https://t.co/x2D58MiGwk

Andrew Yang to his gays pic.twitter.com/lsobjyGP2c