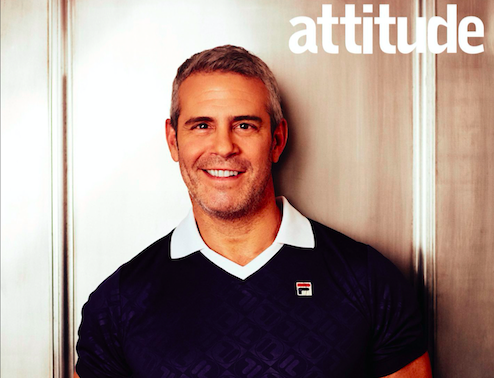 When it comes to hanky panky, Andy Cohen describes himself as “pretty uncensored.”

“I talk about poppers and about bottoms on my show,” he says in a new interview for Attitude’s October issue. “That’s the thing, I’m really open about who I am and am unapologetic, so I think there’s something freeing in that.”

It didn’t always used to be that way, though. The 50-year-old Bravo exec, who was recently the subject of a shockingly homophobic story published by the National Enquirer, reveals that when he first came out, sex “scared” him.

Thanks @attitudemag for the great shoot & cover – and I can’t wait to host the awards on 10/11 in London! @CliffJoannou @JosephKocharian @LeighKeily

Nowadays, it isn’t sex that scares him so much as dating, which he says can be a real challenge given his celebrity status.

“I think it’s harder for other people to sit down with me and have a date because they have preconceived notions,” Andy says.

“If I had never dated myself or I didn’t know me and it was just based on TV, I don’t know what I would think. I have no idea.”

As for dating apps, Andy says he uses them. But only on occasion. Hooking up was a lot easier before he was a TV star.

“I have been, kind of on-and-off because it’s challenging,” he explains. “It’s weird. It was probably more uncomplicated hooking up before I became famous.”