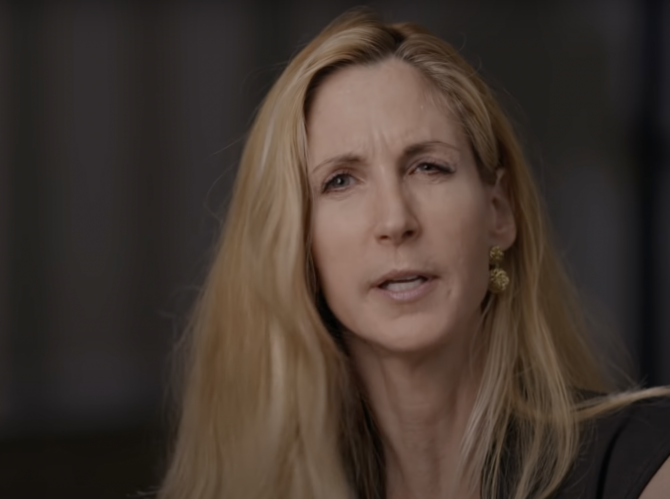 Ann Coulter’s at it again.

“Is this real?” the dragon lady wrote. “What IS this?”

The San Francisco Gay Men’s Chorus posted a music video titled “A Message From the Gay Community” to its YouTube channel in July 2021. The song, meant to be satire, boasted about how the LGBTQ community planned to “convert the children” of conservatives and they were “coming for them.”

The joke didn’t quite land with audiences and the video drew swift backlash, mostly from conservatives, but also from some liberals who felt it was in poor taste. Eventually, the group took it down after several of its members received threats of violence that had to be reported to the police. “It is obvious the tongue-in-cheek humor is lost on many,” the chorus said in a statement.

An Important Message to the Chorus Family. ?? pic.twitter.com/XBpSY6r4j7

Nine months later, Coulter is apparently just learning about the video for the first time, and she’s utterly aghast by the whole thing.

Here’s how people have responded to her feigned outrage…

To understand it, you need a sense of humor, so I can see where you might be confused.

Ann have u been huffing spray paint

That is expert level trolling! I didn’t know the left had it in them, but credit where credit’s due. 😂

Calm down Ann, it’s a joke!

Republicans accuse liberals of being pedophiles because they advocate for gay and trans rights. Meanwhile, Republicans actually have dozens of convicted pedophiles at all levels government, and conservatives seem to not notice.

You are clearly out of touch if you haven’t heard this yet?

Coulter has been on quite a homophobic Twitter streak lately. Last week, she shared a clip from The Killing Fields, a 1984 film about the Cambodian genocide, that showed a group of school children being taught to disown their parents.

“I bet these brainwashed automatons taught to hate their parents were encouraged to SAY GAY!” she captioned the video.

I bet these brainwashed automatons taught to hate their parents were encouraged to SAY GAY! https://t.co/LxZHANQA1v

And a few days before that, she shared an article about Donald Trump telling a supporter “You don’t look gay”, along with the caption: “Okay, that’s funny.”

Know what else is funny? That time she almost got pied during a speech at the University of Arizona in 2004. Students Phillip Edgar Smith and William Zachary Wolff told police afterward that they were “throwing the pies at her ideas, not at her.”

Related: Comedian Nikki Glaser shares the one joke about Ann Coulter she feels a tiny bit bad for making