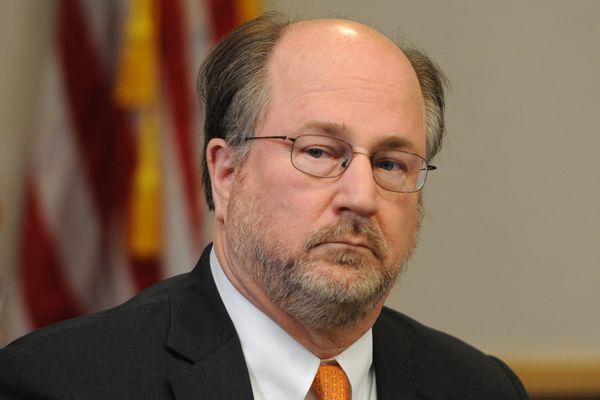 Alaska is out an Attorney General now that the guy who was in the job, Republican Kevin Clarkson, abruptly resigned after sending 558 “uncomfortable” text messages to a much-younger female staffer.

“I regret that my actions and errors in judgment in interacting with a state employee have become a distraction to the good work and good people working in the state’s and your service,” Clarkson wrote in his resignation letter this week.

“You’re beautiful … sweet dreams. 😘 Sorry to bother you,” one of Clarkson’s messages read.

“What are you doing sweet lady?” another inquired.

“Always nice to see you beautiful lady,” he wrote in a third. “You have to find a way to say yes and come over and let me cook for you.”

And in a fourth, Clarkson noted how the nights were getting longer, then he asked, “Are you still up?”

The attorney general texted the woman at all hours of the day and evening, sometimes from his state office, until she sent him a message in early April asking him to respect professional boundaries and saying she doesn’t accept late-night calls on her personal phone.

In total, Clarkson invited the woman over to his house a total of 18 times. She declined every invitation. (It should be noted that Clarkson’s wife currently lives in Colombia and is waiting for her immigration papers to be processed.)

Clarkson insists he was just being “conversational” when he called the staffer beautiful and invited her over to his house. He also says he believed the exchanges were “reciprocal” and “mutual.” He’s a married man, after all!

“All of these texts were ‘G’ rated,” he swears. “In our texts we exchanged mutual endearments in words and emojis. On several occasions, this person initiated a friendly hug when I came to her work place, and I reflexively gave her a peck on top of her head.”

Because that’s totally normal. Like, what married person doesn’t “reflexively” kiss their co-workers at the office and then invite them over to their house in the middle of the night while their wife is away?

Public records show that this is not the first time [Clarkson’s] interactions with a woman have raised questions about harassing behavior. In two requests for domestic violence protective orders filed in state court in 1996, Clarkson’s ex-wife accused him of harassing and threatening her.

In a request for a protective order filed Aug. 23, 1996, his former wife wrote that Clarkson “threatened me not to tell anyone ‘what happened 10 years ago.’ (He’d paid for sexual favors from a pros),” short for prostitute.

…On July 21, 1996, a magistrate granted one of the protective orders against Clarkson. It is unclear from court documents how the second, filed a month later, was resolved. In a response filed in state court during the same time period, Clarkson wrote that he sought to have the domestic violence filings dismissed and that he never committed violence of any kind toward his wife.

Now, for that next layer…

Clarkson has been associated with the antigay hate group Alliance Defending Freedom for decades, working to chip away at LGBTQ equality since 1997 and donating over 10,000 pro bono hours as a lawyer to fight for its anti-LGBTQ causes. Media Matters published a whole exposé about it in January 2019.

And despite being twice married himself (and allegedly paying for prostitutes), he is also a longtime opponent of marriage equality. In 1998, he helped draft Alaska’s constitutional amendment that defined marriage as between one man and one woman and that was eventually struck down by the U.S. Supreme Court in 2015.

Oh, and he hates trans people. Like, really hates them. Just last August, he argued that transgender people shouldn’t be protected from workplace discrimination.

According to the Department of Law, Deputy Attorney General Ed Sniffen will fill in as the acting AG until a suitable replacement is appointed by the governor.