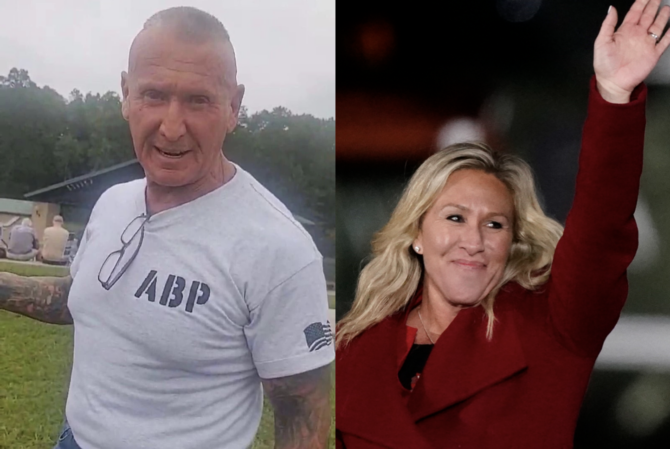 A former leader of the KKK and the neo-Nazi National Alliance is running for office in Georgia and his campaign is drawing inspiration from Republicans like Donald Trump, Kelly Loeffler, and Marjorie Taylor Greene.

Chester Doles recently filed paperwork to run for a seat on the Lumpkin County Board of Commissioners in Lumpkin County, Georgia in 2022.

The ex-con, who’s been to prison twice, made headlines last December when he took a selfie with Loeffler when she was campaigning for reelection. After the photo went viral, she issued a statement saying she had no idea he was a well-known white supremacist in her state when she took the picture.

In 2017, he marched in Charlottesville.

This is who @KLoeffler is proudly appealing to. pic.twitter.com/4YZcvL05rf

He made headlines again about a month later, when he was spotted in a photograph alongside Greene at a Second Amendment rally.

As 2022 approaches, the 61-year-old has started ramping up his campaign. He recently rode in his town’s annual Gold Rush parade and he’s adopted Greene’s campaign slogan, “Stop Socialism. Save America.”

The current political climate has allowed some candidates with checkered pasts — even checkered presents — to mount successful campaigns. This month, at least seven people who were at the Jan. 6 Trump rally won public office in races around the nation. In North Carolina, Democrats in the state House stormed out when the Republican caucus seated its newest member, a former county commissioner who marched on the Capitol and was “gassed three times” and was at the Capitol door when it was breached, but said he was not involved in the violence.

“Maybe my unique experience and things I shouldn’t have been involved in and extreme behavior — maybe it brings a whole different perspective,” he says. “I’m definitely about draining the local swamp. We’re going to replace politicians with patriots.”