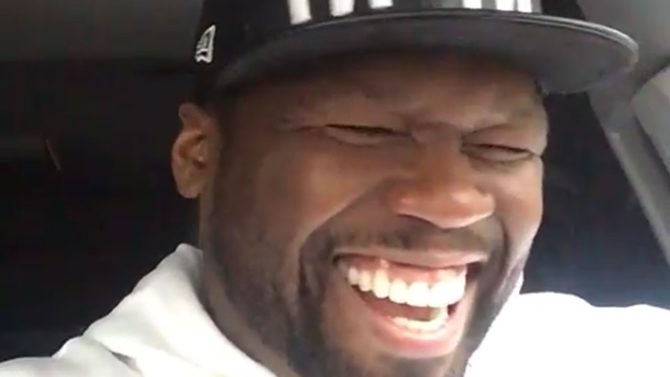 While promoting his new album Elevation last month, R&B singer Tank told an interviewer that a man performing oral sex on another man doesn’t necessarily mean either of them are gay.

“It doesn’t mean he’s gay,” Tank said. “It means he sucked d*ck… because the art of being gay is being gay.”

The remarks caused a stir among Tank’s fans, but it also ushered in some useful dialogue about bi-curiosity and sexual fluidity. Then yesterday, 50 Cent decided to weigh in on the whole thing.

On Thursday, the rapper, who loves any opportunity to call his colleagues gay, posted a picture to his Instagram page showing Tank in a pink Pride hoodie, along with the caption: “yo my man Suga Tank said you not gay if you s**k [eggplant emoji] once or twice. what kinda sh*t is going on?”

?yo my man Suga Tank said you not gay if you ?suck ?once or twice. ?what kinda shit is going on? #lecheminduroi #bransoncognac

When an Instagram user named @mizz.kea asked 50 Cent if he has something against gay people, the rapper replied, “no I’m just saying a straight man would never say no sh*t like that. Lol.” 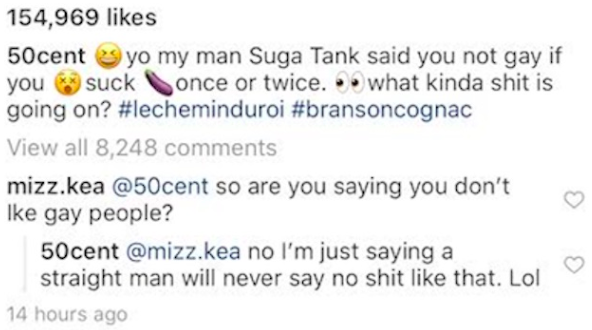 Meanwhile, Tank, a longtime LGBTQ ally, used the opportunity to once again plug his new album, commenting directly on 50’s post: “Make sure you get the #1 R&B album in the world “Elevation”! @50cent if you play my album you won’t have to buy yo girl sh*t to f*ck. Let me help you.”

Of course, this is hardly the first time 50 Cent, who himself fallen victim to untrue gay rumors and was very upset about it, has made homophobic and transphobic remarks on social media.

Last year, he attacked rapped Young Buck over rumors had hooked up with a trans woman, calling him “gay” and misgendering the woman in the alleged relationship.