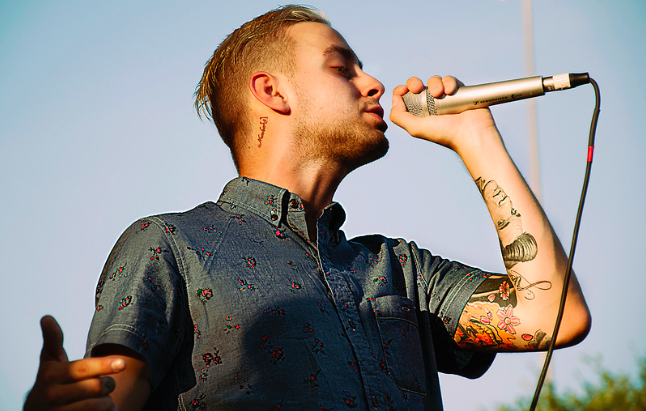 This week, singer Tyler Carter was accused of grooming and sexually assaulting at least one underage male 10 years ago. Now, another man has come forward with additional allegations against the bisexual rocker.

Mikey Sawyer of the indy band Miss Fortune says he first connected with Carter in 2011, when he was 18 years old, to ask if he would be interested in working on a song together.

In a statement published by Lambcoat, Sawyer alleges that throughout their working relationship, Carter pressured him into having sex, despite Sawyer telling him he was straight.

Related: Singer Tyler Carter says “I did not discipline myself” in response to sexual assault allegations

He sent me some extremely sexual texts messages and photos to see if I was willing to engage, to which I told him, “I’m not gay, it wouldn’t even work like that for me I’m sorry bro 🙁 I still really want to be friends though.”

After turning him down once, Sawyer says Carter pressured him for sex again after a show in Oklahoma City, Oklahoma.

We were standing amongst a group of people and bands when all the sudden Tyler starts texting me (standing in the same circle at the time) asking me if he can please take me to the van alone claiming, “I want to s*ck you off so bad lol.”

A year later, Sawer says, it happened a third time. At a show in Springfield, Montana, Carter sexted him about hooking up behind the venue.

He was texting me for nudes before the show, and he asked if I could “f*ck him outside next to the dumpster.” This is when I started sharing these texts with my bandmates. We thought it would be funny to play along and send him stock images of d*ck pics to basically f*ck with him… except, he didn’t understand it wasn’t actually pictures of me, so he ended up getting even more excited from these Google images.

Then in 2014, Sawyer says he saw Carter for the final time and it was “the absolute worst experience of my whole life, which I have only spoken about but to a few close people in recent years.”

Carter allegedly invited Sawyer over to his friend’s mansion. After offering him booze and weed, he asked if Sawyer wanted to sleep in his bed with him. Intoxicated and not thinking clearly, Sawyer agreed.

Obviously this is the part of the story that I don’t feel comfortable going into details, but effectively Tyler coerced me into letting him do things with me that I didn’t want to do. He knows in his heart that I’m completely straight and only played into these acts because I was manipulated, abused and groomed by him. The next morning, I was mortified.

After the incident, Sawyer says Carter went around telling people in their circle that “I s*cked his d*ck because I’m such a fan.” Sawyer felt pressured to keep quiet about what really happened, however, for fear Carter would further “paint me like some closet weirdo who was just clout chasing.”

“I know several guys in bands who have similar stories,” Sawyer claims. “I’m speaking my truth to finally set the record straight on this. Since people have been asking, no I’m not gay in the slightest bit.”

In a statement issued yesterday, Carter admitted to having “crossed boundaries” and “blurred lines” in the early days of his career, but insisted he has “never physically assaulted anyone in my life.”

“I’m gravely remorseful,” he said, adding he never meant to hurt anyone, and that he confused “friendship, brotherhood, and mentorship, with feelings of confusion and romantic interest.”

Since releasing the statement, Carter has completely scrubbed his Instagram page of every image other than his official apology. He has not commented on the allegations made against him by Sawyer.