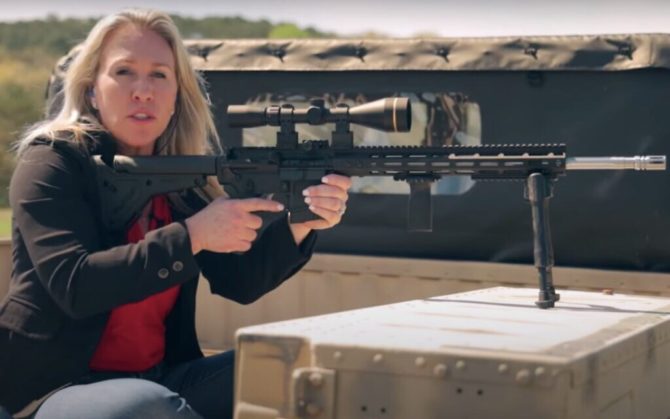 Another day, another deeply disturbing video of Rep. Marjorie Taylor Green chasing after Parkland school shooting survivor/teen activist David Hogg to berate him about his views on gun control.

Yesterday, a video of Greene hunting Hogg down in the streets of Washington, D.C. started making the rounds on Twitter. Today, a new, even more unsettling video of Greene stalking Hogg through the halls of a House Office building is being circulated. Both videos appear to be from 2019, when Hogg was just 18 years old. Greene was 44.

Related: Video shows Marjorie Taylor Greene chasing after Parkland survivor, telling him she has a gun

Scott Dworkin shared the new footage on Twitter, writing, “Here’s video I found of Marjorie Taylor Greene ranting at David Hogg again, this time in the hallways of a House Office Building. Greene’s rant is then drowned out by loud chants of “enough is enough” from March for Our Lives supporters. What Greene says is beyond disturbing.”

Here's video I found of Marjorie Taylor Greene ranting at David Hogg again, this time in the hallways of a House Office Building. Greene's rant is then drowned out by loud chants of "enough is enough" from March for Our Lives supporters. What Greene says is beyond disturbing. pic.twitter.com/avaJ1xvrWc

“How do you get so much media coverage for your group?” Greene demands to know as she runs after the teenager. “Who pays for this?”

Later in the video, she tells Hogg that she owns a gun then says he should be marching for people’s second amendment rights not lobbying for gun reform.

“What you’re doing will not prevent mass shootings,” Greene hollers. “They’ll find another way. … They use machetes to kill people in Nigeria! They hack Christians! They hack them to pieces!”

In addition to these videos, old social media posts from Greene’s pages have resurfaced and they, too, are deeply disturbing.

In one of them, Greene liked a comment calling for “a bullet to the head” of House Speaker Nancy Pelosi and adding that “through removal or death, doesn’t matter, as long as she she goes.”

In another, Greene liked a comment someone wrote about former President Barack Obama and former Secretary of State Hillary Clinton being hanged, responding to the commenter, “Stage is being set. Players are being put in place. We must be patient. This must be done perfectly or liberal judges would let them off.”

In light of the posts resurfacing, Green has begun frantically scrubbing her social media pages.

Greene is also scrubbing her Facebook of old posts and videos from 2018 and 2019 where she spread conspiracies and endorsed violence against Democratic lawmakers. pic.twitter.com/3HoVGU2VZR

Meanwhile, Democrats have begun taking action against the unstable freshman lawmaker. Many are calling on her to resign. Rep. Jimmy Gomez of California went so far as to say he plans to introduce a resolution that would expel her from Congress.

“Her very presence in office represents a direct threat against the elected officials and staff who serve our government, and it is with their safety in mind, as well as the security of institutions and public servants across our country,” Gomez said in an announcement yesterday.

In an effort to prove she’s not insane or uncaring or a bigot, Greene shared screenshots of other social media posts she’s written over the years, including one about her love of Maya Angelou and another expressing concern for a 14-year-old Black teenager who was missing.

“The media only reports the lies, smears, and attacks in order to create the image they want the world to believe,” Greene tweeted. “That’s why they are fake news and no one believes them anymore. They did it to themselves.”

The media only reports the lies, smears, and attacks in order to create the image they want the world to believe.

That’s why they are fake news and no one believes them anymore.

They did it to themselves.