26-year-old actor Ansel Elgort, known for his roles in The Fault in Our Stars and Divergent, as well as his sometimes-racy Instagram feed, has denied accusations of sexual assault leveled against him by a former girlfriend. 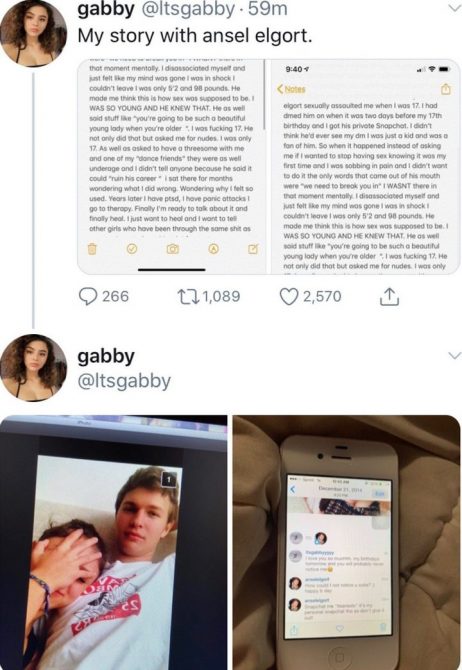 According to Gabby, when she did eventually meet up with Elgort, he pressured her into having sex. She also claims she was a virgin at the time. Gabby says she found the encounter extremely painful–enough to start her sobbing. She claims Elgort assured her “we need to break you in.” She also says the encounter left her with anxiety and panic attacks. “It’s a lot for me to post this but I think it’s time,” she wrote. “I finally talk about my story of me being sexually assaulted. I need to heal and I want others to know they’re not alone.”

Gabby posted her story to Twitter before deleting her account. When pressured by the media, Elgort released a statement via Instagram. “I cannot claim to understand Gabby’s feelings but her description of events is simply not what happened,” he wrote in the post. “I have never and would never assault anyone.”

Elgort acknowledges what he characterizes as a “brief, legal and entirely consensual relationship” with Gabby in 2014. He also admits “unfortunately I did not handle the breakup well” and “stopped responding to her, which is an immature and cruel thing to do to someone.”

“I know this belated apology does not absolve me of my unacceptable behavior when I disappeared,” Elgort concludes.

Elgort will next appear in West Side Story for director Steven Spielberg.