Actor Anthony Rapp has announced his engagement. Rapp took to social media yesterday to reveal he’d popped the question to his partner, Ken Ithiphol. The two men have been together since January 2016.

“So something happened tonight. I asked Ken if he would marry me and he said yes. I am so very happy and I’m so very thrilled to share this news.”

So something happened tonight. I asked Ken if he would marry me and he said yes. I am so very happy and I’m so very thrilled to share this news. pic.twitter.com/2T65DLhSmd

Rapp and Ithiphol, a leadership coach, social researcher and advocate, both re-posted Instagram stories from others showing the actor getting down on one knee in front of friends at a party in Toronto to make his proposal. 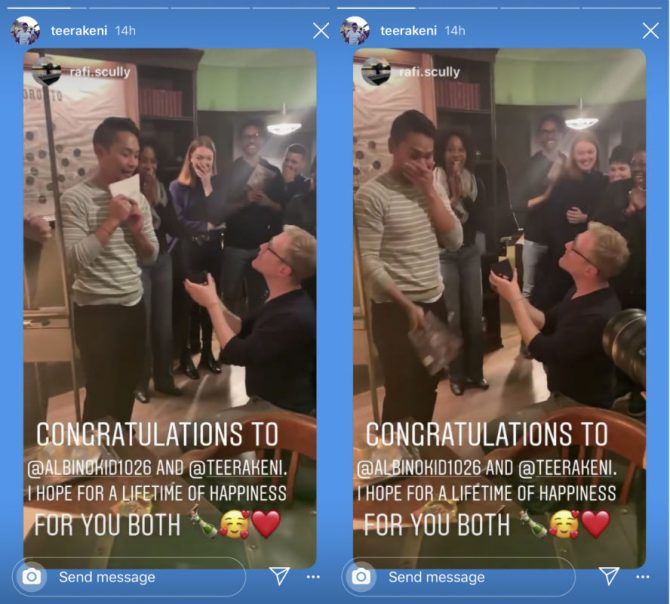 Rapp, 48, has been acting since childhood. He is best known for originating the role of Mark Cohen in the Broadway production of Rent, which he reprised on TV.

Alongside costar Wilson Cruz, Rapp plays one half of the first gay couple in the Star Trek universe.

He came out as queer in the mid-90s, telling Oasis magazine: “I don’t want to get into labels, but I’ve never labeled myself except to say I’m queer. The thing that’s been most important to me to be out about is that I have been in loving relationships with men … I haven’t said, “I am gay.” Because the truth is that I’ve also been in love with women, although the truth is I do think I’m primarily homosexual.”

Following the rise of the #MeToo movement, Rapp hit the headlines in 2017 when he went public with accusations against Kevin Spacey.

He says that when he was 14 and acting in a play, he’d attended a party thrown by the then 26-year-old Spacey. He says Spacey made unwanted sexual advances toward him.

Spacey responded on Twitter, saying he did not remember the encounter, was “beyond horrified to hear his story” and offered Rapp the “sincerest apology for what would have been deeply inappropriate drunken behavior.”

Other men subsequently came forward to make similar accusations against the House of Cards star.

Related: How Anthony Rapp became a sci-fi icon and a #MeToo trailblazer

Ross Mathews reveals more about his upcoming wedding and fiancé