A failed GOP candidate, previously pardoned by President Donald Trump, was suspended from Twitter yesterday after threatening violence against a trans woman.

Angela Stanton-King stood as a congressional candidate in 2020 in Georgia. She ran as a Republican for Georgia’s 5th Congressional Seat (previously occupied by the late John Lewis). She lost, getting just under 15% of the vote.

Whilst campaigning, she made clear her anti-LGBTQ views, comparing gay men to pedophiles and praising men for being masculine (“Our men are not women and Our boys are not girls.”).

It turns out some of that anger may have stemmed from things going on in her own family.

On Monday, Stanton-King took part in an episode of the Dr. Phil TV show. In an Instagram posting, Stanton-King pasted a message she received from one of the show’s researchers. They said they had read about the would-be lawmaker’s grievance with her own teenage trans daughter and invited them both on the show to try and resolve the issue.

However, if Stanton-King was hoping Dr. Phil McGraw would persuade her 19-year-old to listen to her mom, that didn’t happen.

Instead, Dr. Phil also invited a trans woman and well-known advocate, Ashlee Marie Preston on to talk about the reality of being trans and how to support a trans youth.

Stanton-King was outraged. Straight after filming, whilst leaving Paramount Studios, she posted a profanity-laden video in which she blasted Dr. Phil and the show’s producers for making out that she was a bad parent.

Media monitoring organization Right Wing Watch reposted some of the video to Twitter. Be warned, Stanton-King makes some horribly transphobic statements, and asserts, “my son is a man.”

Angela Stanton King, a Republican candidate for Congress in Georgia in 2020, has a transgender child. They taped an episode of “Dr. Phil” yesterday and judging by the vile rant she unleashed after, it did not go well. pic.twitter.com/1f7MXgo9hN

She also posted several tweets criticizing the show and Dr. Phil. She said she would not be helping her child to undergo medical transition, saying “The enemy can’t have him, perverts can’t have him.” 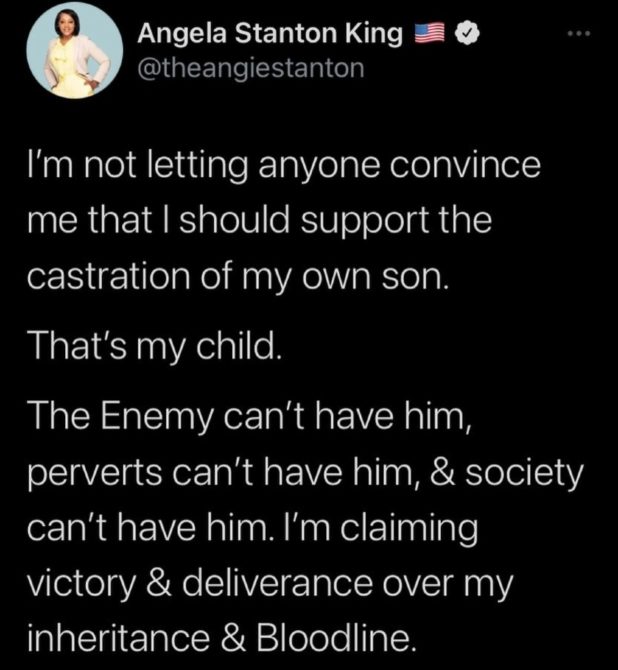 And then it got worse.

Stanton-King also ranted against Preston. In her video from the studio lot, Stanton-King refers to Preston as ‘sir’, criticizes Preston for being unable to have children, and for having the audacity to offer advice about supporting her trans teen.

Preston then posted a tweet, pledging to show support for Stanton-King’s 19-year-old trans daughter if her mother is unable to do so: “I will throw every resource at my disposal at her to see to it that she pops off. She is so beautiful, and intelligent (her little sister too) and she is a strong force ❤️ The apples fell far from that tree…”

She responded to Preston, saying: “N*gga, if I catch you anywhere near my daughter I’ll cut your dick off for you…” 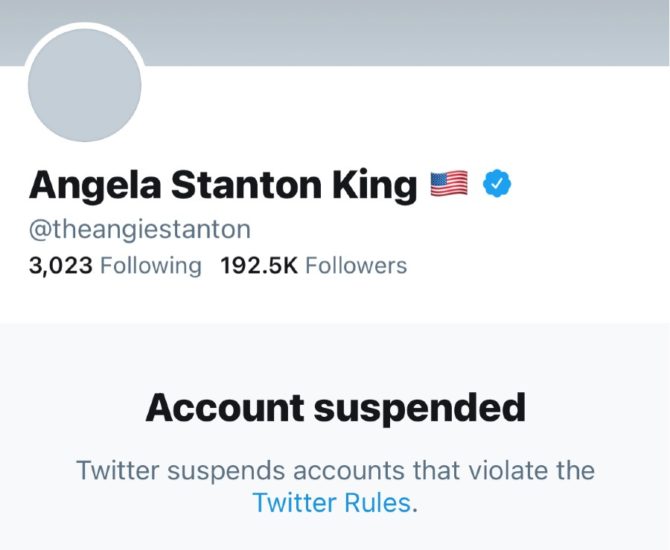 “Do y’all still have questions around why you need to show up for Black trans women?🙃” Preston reminded her followers on Instagram.

“Who do they think takes care of Trans and queer identified young adults and youth, when their families discard them? 🤔 I may not be able to birth children but I have mothered and mentored more people in this life than I can count. I have the stretch marks on my heart to prove it…❤️ I am not afraid of [Stanton-King] nor her Maga following. Given the recent onslaught of anti-trans legislation happening across the country; I’d say I’m just getting started.”

It’s not yet known when this episode of Dr. Phil will air. Queerty have contacted CBS for comment.

Stanton-King is the goddaughter of Martin Luther King Jr.’s niece, Alveda King. She appeared in the BET docuseries From the Bottom Up and wrote a book in 2012 entitled, Life of a Real Housewife.

She was pardoned by President Donald Trump in February 2020 for a 2004 conviction on federal conspiracy charges for her reported role in a car theft ring. She served a six-month home confinement sentence in 2007 over the charges, recently telling the Atlanta Journal-Constitution, “I turned my life around. I have completely redeemed my life.”