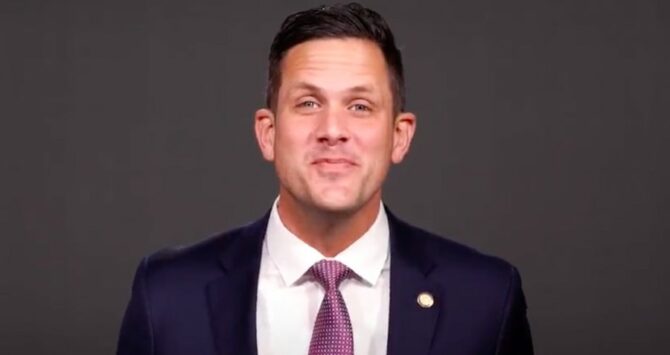 This week, Rep. Joe Harding proposed an amendment to Florida’s “Don’t Say Gay” bill that would force teachers to out their students by notifying parents within six weeks of learning about their child’s LGBTQ identity.

After introducing the draconian amendment on Monday, Harding withdrew it on Tuesday, following heavy pushback from Democrats, LGBTQ advocates, and people with basic common decency who don’t want to see children potentially put in danger.

In a video posted to Twitter earlier this month, Harding defended the homophobic bill he co-sponsored as a way to “empower parents” and keep kids from talking about sexual orientation.

The president and his team decided to distort the truth and outright lie about my bill that empowers parents. Here is my response. ?@POTUS? ?@PressSec? pic.twitter.com/Huo0RNNxBE

Now, PR professional Michael Volpatt has put his expert communications skills to good use by creating a website called the “Joe Harding Gay Resource Page” to push back against Harding’s homophobia.

“I’m sickened by this bill and what it will do to kids and the people that support them,” Volpatt tells Queerty.

The site includes links to the Trevor Project and Lambda Legal. There is also a link to news stories about Harding and the “Don’t Say Gay” bill, and a letter to Florida lawmakers that people can sign and submit through Equality Florida’s website.

The site also has a message for visitors that reads: “Remember always that no matter who you are or whom you love, you are special. Don’t let anyone tell you otherwise.”

The “Don’t Say Gay” bill was approved by a vote of 69-47 in the Florida House of Representatives. It will now advance to the Florida Senate. Governor Ron DeSantis has already indicated his support for the legislation.