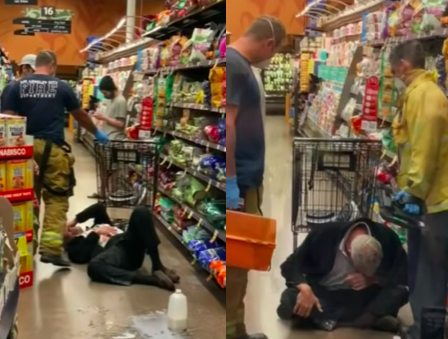 Another day, another anti-masker caught on tape doing something incredibly stupid and inconsiderate.

This time it’s an unnamed California man and his shopping companion who refused to wear a mask at a Ralphs grocery store in Los Angeles.

When an employee told them they needed to wear a face covering per a mandate by the mayor and the governor, the man became irate.

2 “Kevin’s” refused to wear a #mask & attacked the general manager of a @RalphsGrocery in Los Angeles after she tried to enforce state law.

She ended up having to pepper spray them to defend herself. This is the aftermath pic.twitter.com/mSpV6xrNOo

According to CBSLA, multiple witnesses saw the man repeatedly ram his shopping cart into the woman while screaming at her.

“I looked down there and there was this guy just yelling at someone, and then all of a sudden you see him, you know, take the handles of his cart and just try to ram this woman,” a witness recalled.

In an act of self-defense, the employee pepper-sprayed the man. He fell backwards, landing in a heap on the floor, where he burst into a fit of tears.

The witness said the man continued screaming at the woman while he pushed his cart into her. She also said she saw another woman try to push the man out of the way. … Cell phone video taken moments after the incident unfolded at the Ralphs in the 200 block of South La Brea Avenue shows the man sitting on the ground, surrounded by milk.

Paramedics were called. They took the sniveling man to a nearby hospital as a precaution. It remains unclear whether he will face any criminal charges for attacking the store employee.

The morals of the story: 1. Don’t assault people with shopping carts, and 2. Just wear the damn mask.

Related: Man throws psychotic temper tantrum after someone tosses water on him for shouting antigay slurs