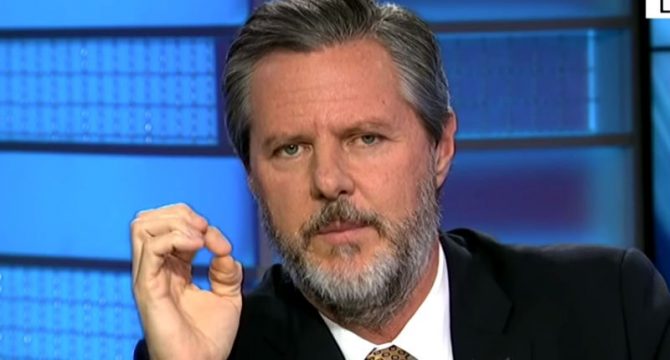 According to new reporting by Reuters, in the months before Falwell endorsed Trump’s presidential bid, he contacted Cohen seeking help regarding an “embarrassing personal matter.”

Cohen later told actor Tom Arnold about the photographs, who shared a recording of their conversation with The Washington Post yesterday.

Reuters was unable to determine who made the demand. The source said Cohen flew to Florida and soon met with an attorney for the person with the photographs. Cohen spoke with the attorney, telling the lawyer that his client was committing a crime, and that law enforcement authorities would be called if the demands didn’t stop, the source said.

According to the source, the matter was “resolved” and the photos were “destroyed.”

Since the story broke late yesterday, an attorney for the Falwells rushed out a statement calling the whole thing “not accurate.”

“While the Falwells have a long-standing friendship with Michael Cohen,” the statement read, “Cohen did not ever resolve any legal matter on their behalf.”

In a follow up text, the attorney insisted “there are no compromising or embarrassing photos of Falwell, period!”

Subscribe to Queerty for a daily dose of #politics #donaldtrump #jerryfalwelljr. stories and more