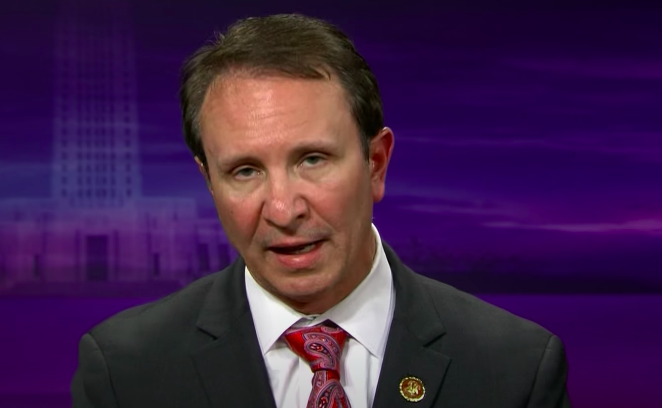 For weeks, Louisiana’s “family values” Attorney General Jeff Landry has been publicly fighting with the state’s Democratic Governor John Bel Edwards over mask mandates, saying they are a violation of people’s rights.

Then yesterday, shortly before he was supposed to meet with Vice President Mike Pence, Landry announced he had tested positive for coronavirus.

In a statement, Landry’s office said:

Out of an overabundance of caution with the Vice President coming to our State, the Attorney General was tested for the Coronavirus. Though experiencing no symptoms, he tested positive for COVID-19. The Attorney General is quarantining, taking medications prescribed by his doctor, and remaining asymptomatic. He has contacted those with whom he came in contact.

The statement added that Landry’s work as Attorney General remains “uninterrupted” and he will “continue his efforts to protect Louisiana’s families, freedoms, and the rule of law” while recovering.

Landry, who doesn’t want anyone to know he has a gay brother, has been one of the most vocal opponents against all directives by the governor aimed at slowing down the spread of the deadly virus, whose victims are crowding into Louisiana’s hospitals at record rates.

Related: Antigay politician finally, and awkwardly, acknowledges that, yeah, OK, he has a gay younger brother

Just last week, he urged school board members not only to reopen schools across the Pelican State on schedule next month, but to refrain from mandating masks because it infringes upon students’ liberties.

“We believe that mandating students to wear masks creates a situation that may cross the line on liberty, and also may become a tremendous distraction with enforcement,” Landry said on July 9, adding that teachers should not have to play “mask-enforcement police.”

And last month, he criticized the State Fire Marshal H. Browning Jr. for supporting a temporary ban on indoor events, like concerts and other live entertainment, saying such a ban violated the state Constitution.

Since testing positive for coronavirus, however, Landry has been trying to revise his own history, claiming he’s worked very hard to fight COVID-19 and “never discouraged masks.”

Landry has a long history of fighting with Gov. Edwards. In in 2016, he won a court battle against the governor to take away existing LGBTQ protections for state employees.