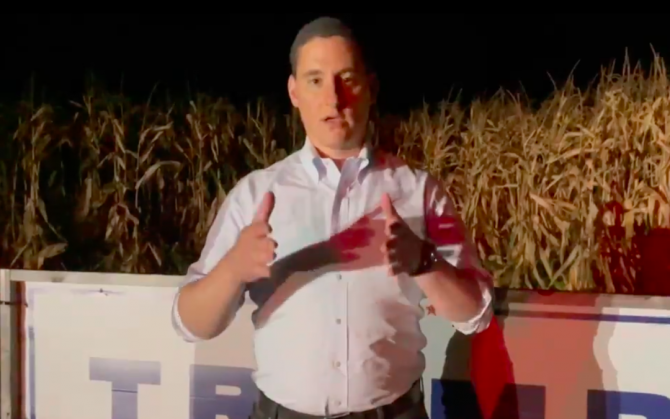 Republicans are freaking out after President Biden’s announcement of vaccine mandates this week. But perhaps nobody’s more unnerved than antigay GOP candidate Josh Mandel, who had a psychotic meltdown in an Ohio cornfield late last night.

The former Ohio Treasurer, who is Jewish and accepts campaign donations from Nazis, urged his supporters to “not comply” with any of Biden’s orders, even if they are upheld by the courts.

Related: GOP candidate Josh Mandel just mocked a queer teenager on Twitter because of course he did

“I’m driving through western Ohio, driving through a cornfield near a town called Logansville, Ohio,” the 43-year-old said in a minute-long video posted to social media yesterday. “My blood is boiling in rage at what I’ve seen from the White House today!”

Oh, Josh, quit being so dramatic.

“Joe Biden–I’m not even going to call him President Biden, he’s not–Joe Biden is creating a constitutional crisis!” he continued. “As I was driving through this cornfield, I literally came across this sign, this Trump sign. He is my president!”

Mandel, who has a gay cousin and hates LGBTQ people, is currently running for the U.S. Senate seat that opened up when Sen. Rob Portman announced he would not seek re-election.

“And if they don’t,” he added, “I call on my fellow Americans: Do not comply!”

Yes, you read that correctly, folx. Mandel first said it’s important to “stand up for the Constitution” and then, seconds later, said people should “not comply” if they don’t agree with the conservative Supreme Court’s ruling on the Constitution.

“Do not comply with the tyranny!” he continued. “When the gestapo show up at your front door, you know what to do!”

Do NOT comply with the tyranny.

When the gestapo show up at your front door, you know what to do. pic.twitter.com/hLJbcx4ace

Now, check out some of the comments…

Why are you driving through a cornfield josh

Inciting violence and invoking a Nazi organization in the same tweet. What a disgrace.

Also conservatives: “Do not comply!”

No, @JoshMandelOhio, the COVID vaccine is not the gestapo.

Here were my great aunts who were killed in the Holocaust.#GetVaccinated pic.twitter.com/7Okh7NZNvk

Do you get up every morning, look in the mirror and ask yourself “how could I possibly look more ridiculous today than I did yesterday?”

I thought you would have reached peak-ridiculous with your burn-a-mask-at-the-bottom-of-a-stairwell video. Boy, was I wrong.

Imagine saying this in front of a big TRUMP banner, the guy who had secret police in unmarked vans abduct peaceful protesters off the street.

Even more terrifying, what do you do when this spooky “Children of the Corn” guy Josh Mandel shows up at your door in the middle of the night? 😱 pic.twitter.com/ec45Jh3OPA

Without sound it looks like you are yelling at a cop trying to give you a breathalyzer, my dude.

How it started. How it’s going. pic.twitter.com/mAuGyOjaJ6