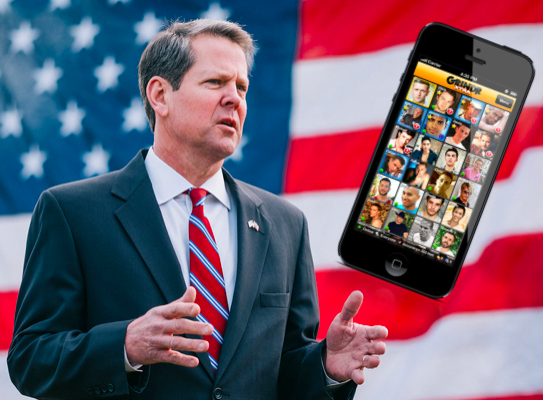 Brian Kemp is an antigay gubernatorial candidate from Georgia. He is currently running a vicious campaign against Democratic rival Stacey Abrams who, if elected, would become the nation’s first female African American governor.

The two are statistically tied in the polls with Kemp holding a very, very narrow lead over Abrams. Because of this, he’s desperate for whatever votes so he can get. So desperate, it seems, that he’s been running ads… on Grindr.

55-year-old Kemp has voiced his support for House Bill 757, the anti-LGBTQ Religious Freedom Restoration Act. Republican Governor Nathan Deal vetoed the bill in 2016, but Kemp said he would happily sign a similar one into law if elected governor.

Kemp’s campaign declined to comment on the Grindr ads, though an adviser did say the ad could have popped up if the user had visited Kemp’s website recently, due to targeted advertising through technology tracking.

Honestly, that’s probably what happened. But it doesn’t make it any less awkward. After all, no gay person wants to hear from an antigay lawmaker about sex offender legislation… while they’re cruising for sex.

A spokesperson for the Georgia Democratic Party, Seth Bringman, said: “Instead of cruising for votes on Grindr, Brian Kemp should stand up for LGBTQ Georgians and promote a strong economy by committing to veto RFRA–just as Nathan Deal did.”

Bringman also said he doubts Kemp’s Grindr ads are going to result in many votes for the Republican as “he has made clear that he would sign discrimination into law if he is elected governor.”