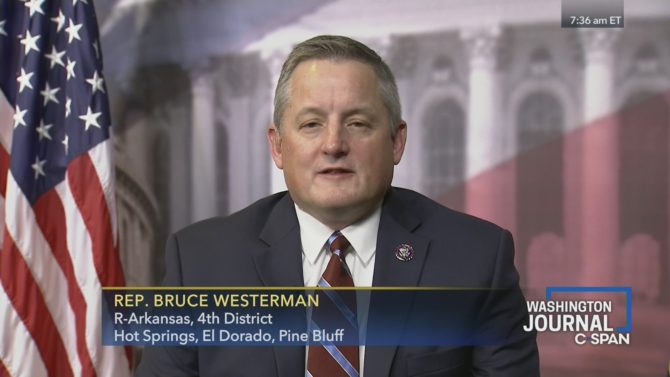 An antigay House Republican has just admitted to barricading himself in a bathroom with a 160-year-old sword during the January 6 insurrection on the U.S. Capitol.

According to The New York Times, Rep. Bruce Westerman of Arkansas said he fled to House Minority Leader Kevin McCarthy‘s office after the MAGA militia breached the Capitol building. At some point, the GOP leader’s security team rushed McCarthy to a more secure location, but for whatever reason they left Westerman behind to fend for himself.

After the House chamber was evacuated on Jan. 6, Mr. McCarthy retreated to his Capitol office with a colleague, Representative Bruce Westerman, Republican of Arkansas. When it became evident the rioters were breaking in, Mr. McCarthy’s security detail insisted he leave. But Mr. Westerman was left behind in Mr. McCarthy’s inner work area, he said in a recent interview. For protection, Mr. Westerman said he commandeered a Civil War sword from an office display, barricaded himself in Mr. McCarthy’s private bathroom and waited out the siege while crouched on the toilet.

That’s right, folx. Westerman grabbed a dusty old sword from off the wall then hid inside McCarthy’s private bathroom, crouching on top of the toilet so nobody would see his feet, and just waited for the chaos end.

Why he chose to volunteer this story is anyone’s guess since it doesn’t make either him or McCarthy look good. But dignity has never exactly been the Republican party’s strong suit.

During the commotion, presumably whilst cowering in the bathroom, Westerman took to Twitter to condemn the mob, writing: “Americans will always disagree on politics, but violently storming our nation’s Capitol is absolutely unacceptable. People are getting hurt. Enough.”

Americans will always disagree on politics, but violently storming our nation’s Capitol is absolutely unacceptable. People are getting hurt. Enough.

Westerman is about as antigay as they come. Not only is he opposed to same-sex marriage, but he’s opposed to civil union, as well.

He also doesn’t believe LGBTQ people should be included in any non-discrimination protections, and he thinks trans people shouldn’t be allowed to go to the bathroom.

Oh, and he says businesses should have the legal right to deny services to LGBTQ people based on religious objections.

And he opposes the Equality Act.

Since the cowering on the toilet with a sword story broke, Westerman has become the laughingstock of the internet. Here’s what people are saying…

Republican Congressman Bruce Westerman broke an antique Civil War sword out of a display case and clutched it with white knuckles while crouching on a toilet in Kevin McCarthy’s office bathroom while hiding from the Capitol rioters. At least something good happened that day. pic.twitter.com/BXyWTkEEnb

Bruce Westerman (R) Ark commandeered a Civil War sword barricaded himself in McCarthy’s private bathroom and waited out the siege, crouched on the toilet. A week later voted against impeaching Trump. ????????

So is this the sword you used on the shitter January 6th? pic.twitter.com/GviMR2FO6w

Hiding on a toilet! With a Civil War era sword he stole from a display! After McCarthy told his security to abandon him!

Bruce Westerman cowers behind a toilet with an ornament.

A spokesperson for Westerman told media that he wouldn’t comment any further on his terrifying experience during the insurrection, which he has described as “craziness” and “a really disgraceful moment for our country.”