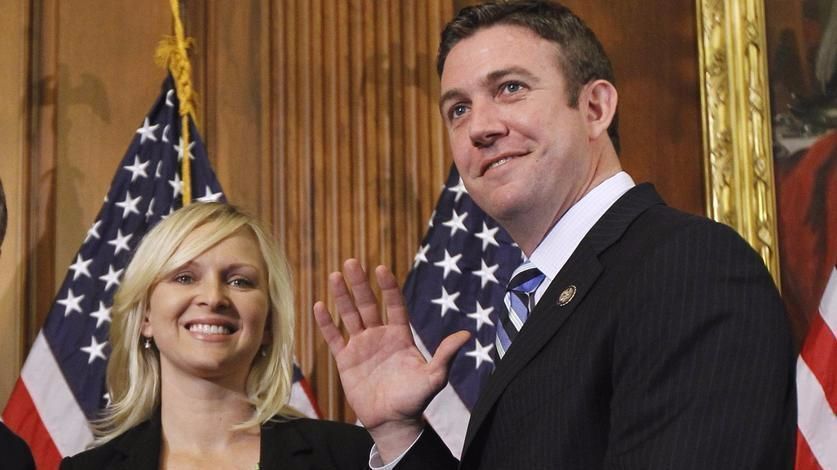 Rep. Duncan Hunter of California was busted this week, alongside his wife Margaret, for misusing $250,000 in campaign funds to pay for private vacations, dental bills, and even a plane ticket for their pet rabbit.

Now, in an amazing interview with FOX News, 41-year-old Hunter, who loves Donald Trump and hates gay people, tried pinning all the blame on Margaret, who served as his campaign manager.

“She was also the campaign manager, so whatever she did, that’ll be looked at too, I’m sure,” Hunter told Fox News host Martha MacCallum. “But I didn’t do it. I didn’t spend any money illegally.”

Nothing says “family values” like throwing your own wife to the wolves.

When asked, “Are you saying it’s more her fault than your fault?”, Hunter replied:

I’m saying when I went to Iraq in 2003, the first time, I gave her power of attorney and she handled my finances throughout my entire military career and that continued on when I got into Congress. Because I’m gone five days a week, I’m home for two.

He went on to say admit his campaign definitely made “mistakes,” but maintained that he was not responsible for any of its improper spending. Also, his wife was in charge of campaign, not him. Got that? So it was her fault, not his. OK?

“There was money spent on things, not by me but by the campaign,” he said. “And I paid that back before my last election.”

Hunter supported the Defense of Marriage Act and voted to delay the repeal of Don’t Ask, Don’t Tell. He is also a vocal opponent of transgender military personnel, saying he could not imagine showering with “somebody who was a girl and didn’t have the surgery to become a man but kept the girl stuff.”

Watch his interview with FOX News below. Or don’t.