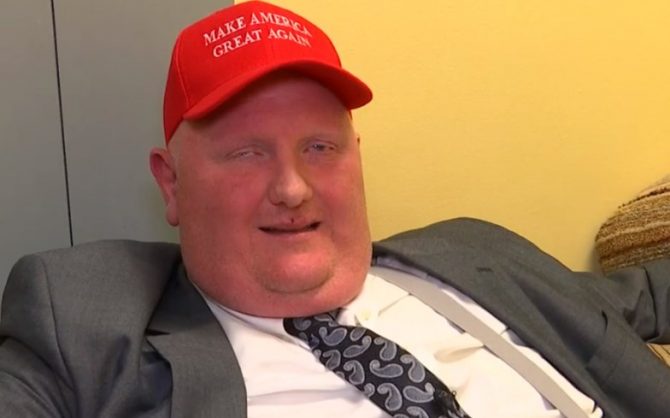 It’s a scary world out there for West Virginia House of Delegates member Eric Porterfield, one that is being overrun by LGBTQ terrorists who are taking their cues from the KKK.

“The LGBTQ [sic] is a modern day version of the Ku Klux Klan,” Porterfield told Charleston Gazette-Mail on Friday, “without wearing hoods with their antics of hate.”

“I am terrified of these people! They are opponents of freedom!”

The 44-year-old MAGA Republican went on to label the LGBTQ community a “terrorist group” and “brutal monsters”. He also claimed he was being “persecuted” by them by way of mean Facebook messages and nasty phone calls because of homophobic remarks he made last Wednesday.

Last night and today, members of the LGBTQ have exercised hate crimes and threatened my safety. We have reported this to the Capitol Police in Charleston and I would like all of my friends to pray for the… https://t.co/a1lIhpGCkw

It all started when Porterfield, who is legally blind, used the word “f*ggot” in House session while railing against an anti-LGBTQ discrimination bill which he described as “bigoted” and “discriminatory” and argued would would somehow hurt “gays.”

“The LGBT is the most socialist group in this country!” he warned colleagues. “They do not protect gays. There are many gays they persecute if they do not line up with their social ideology!”

Later in his tirade, Porterfield, who is also a minister at Blind Faith Ministries, brought up Milo Yiannopoulos’ 2017 speaking tour, during which he used the antigay slur “f*ggot”.

“We cannot allow discriminatory bigots to determine how our citizens are going to live!”

In other Porterfield news, back in December, he used his church’s Facebook page to post a discreet ad seeking a “devoted Christian male” who could work as his personal assistant.

Call us crazy, but a raging homophobe who goes out of his way accuse “the LGBT” of being dangerous and disgusting and a threat to humanity seeking a “devoted” male he can pay for “overnight stays” sounds a little, well, gay.

Or maybe he just needs a big strong man to protect him after dark from all those LGBTQ socialists?

Related: Peter Thiel is looking for a “versatile” personal assistant who is available 24/7