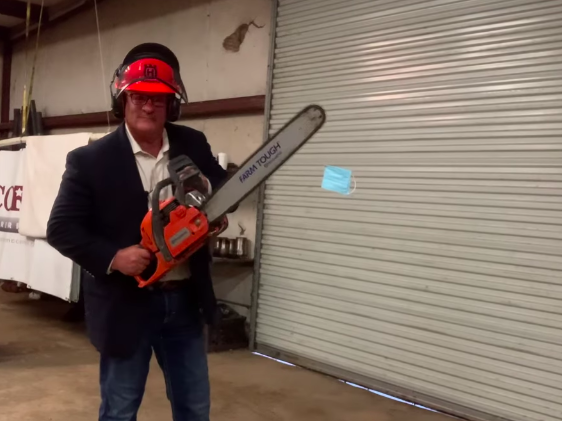 He’s an antigay Republican state lawmaker from Louisiana who just released a video in which he pretends to set a mask ablaze with a blowtorch and then shred it to pieces with a chainsaw.

“Your body is your private property,” 59-year-old McCormick declares in the video, which was posted to his Facebook page earlier this week.

“If the government has the power to force you to wear a mask they can force you to stick a needle in your arm against your will. They can put a microchip in you. They can even make you take the mark. After all, it’s for the greater good.”

McCormick goes on to say that “masks aren’t bad, mandates are” before declaring that “people who don’t wear masks will be soon painted as the enemy just as they did to Jews in Nazi Germany.”

“Now is the time to push back before it’s too late,” he warns. “We can preserve America.”

“It’s a tremendous response,” he alleges. “The liberty message is strong. It’s amazing more politicians don’t take on the liberty movement because it’s so popular.”

Now, here’s what some of the commenters on Facebook have been saying…

“You are wrong,” one person wrote. “The Constitution and the Supreme Court both say govt may constrain freedom for the sake of the health and well-being of the people. There is also common sense and community spirit. Mandates are required when too many people refuse to do the right thing.”

“You, sir, are willfully ignorant of scientific facts,” another said. “When you are unwilling to share the collective burden we have to eliminate this, you are are not just some ridiculous side-show politician.”

We’d just like to add that wearing a mask is ABSOLUTELY NOTHING like being a Jew in Nazi Germany.