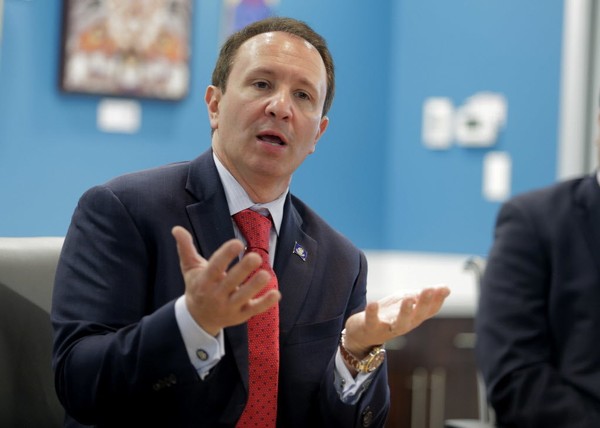 There’s been a lot of renewed chatter in recent weeks about sex abuse happening within the Catholic church after more than 300 priests from Pennsylvania were accused of sexually assaulting countless victims, many of whom were young boys.

Landry, who doesn’t want anyone to know he has a gay brother, released a statement on Friday saying he totally supports going after child molesters. But, also, he’s a Catholic. So what’s a guy to do, right?

“As a practicing Catholic, I wholeheartedly support efforts to root out pedophile priests and end the horrific misconduct by Church authorities,” he said. “Those who sexually abused children and those who covered up their despicable acts should be prosecuted to the fullest extent of the law.”

He just doesn’t want anything to do with it. Even though he’s the state’s Attorney General.

Related: Antigay politician finally, and awkwardly, acknowledges that, yeah, OK, he has a gay younger brother

Instead, Landry’s office said anyone who may have been raped and/or sexually abused by a priest should contact their local law enforcement and let the little guys handle it.

But here’s where the story gets even weirder.

After the Times-Picayune reported on Landry’s remarks, the 47-year-old lawmaker went on the defensive, saying that “as a father and a Catholic” he was “deeply offended” by people’s criticisms of him.

“This article by the Times-Picayune is pure unadulterated religious bigotry which we have not seen in this State since the hey-day of the Ku Klux Klan,” Landry said in a statement.

Wait… what? How did we go from child molesting priests to the KKK?

“Claiming that I, or any other head of a law enforcement agency, will cover up criminal conduct because of our religious beliefs is bigotry, plan and simple,” Landry added.

Got that, folks? Forget, for a moment, any children who may have been raped by priests and clergymen. Jeff Landry and his fellow Catholics are the real victims here.

In addition to standing tall for religious freedom, Landry has made it his personal mission to chip away LGBTQ rights for years.

In 2010, he supported a constitutional Amendment defining marriage as between one man and one woman. In 2012, he campaigned to rid the University of Louisiana’s LGBTQ Studies minor. And in 2016, he won a court battle against the state’s Democratic Governor to void existing LGBTQ protections for state employees.

In his statement, Landry also noted that his office “has not received one single complaint against any clergyman of the Catholic Church in the State of Louisiana.”

Probably because he told people not to contact him with those sorts of complaints.

And he concluded by saying his critics “should be ashamed” of themselves and “should apologize to all Catholics within Louisiana.”

OK, Jeff, we’ll get right on that.