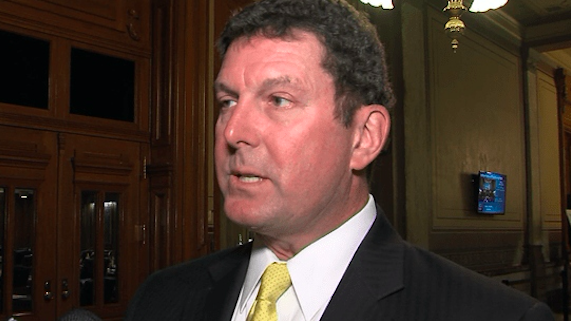 A state lawmaker from Indiana insists he’s absolutely positively not racist after he posted a blatantly racist meme to social media.

Republican Rep. Jim Lucas, who once proposed the state stop issuing marriage licenses altogether in an effort to combat same-sex marriage, shared the meme on his personal Facebook page earlier this week.

The meme depicted a group of Black children dancing along with the caption, “We gon’ get free money!” 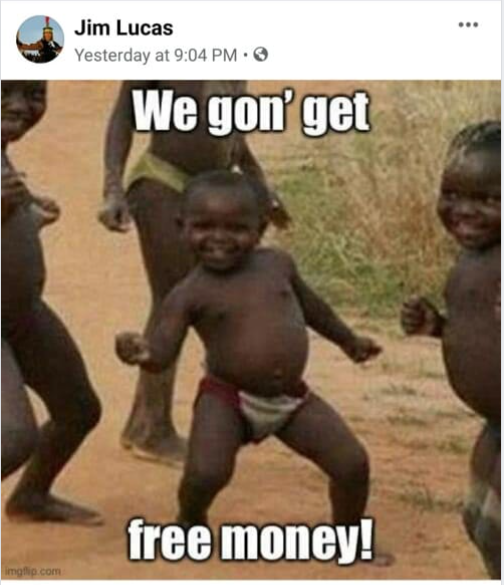 A backlash quickly ensued, with many criticizing Lucas not just for the image, but for writing in ebonics.

Lucas, who has been a member of the Indiana House of Representatives since 2012, responded to the criticism in another Facebook post, this time saying the world had “lost it’s mind” and he was simply “bored and made several memes.”

“I used this STOCK PHOTO of a little boy dancing and celebrating because the government is handing out free money, to everyone, regardless of their skin color,” he wrote.

Then he tried flipping the blame onto his critics.

“I phrased it in a celebratory way and have danced and mocked things in that exact same manner myself,” he wrote. “I’m white. But hey, it’s a picture of a black kid so I guess that makes it different, WHICH IF YOU THINK THAT WAY, IS THE VERY DEFINITION OF RACISM!!!!!!”

WOW, the world has officially lost it’s mind!I was bored last night and made several memes on imgflip.com, essentially…

He followed that up with a second post in which he copied and pasted the Merriam Webster Dictionary definition of the word “racism” then posted a lengthy argument as to why he doesn’t fit that definition.

“I recently used a picture of a happy, cute, cocky kid dancing and celebrating to make a humorous meme mocking the government’s destruction of our economy,” Lucas wrote.

He continued, “There was ZERO intent of racism, I simply found the little kid cute and knew it was a well known picture. It’s. That. Simple. To me, to NOT use a picture SPECIFICALLY because of someone’s skin color is the very definition of racism, based on my beliefs and the above definition of racism.”

rac·ism/?r??siz?m/noun1.prejudice, discrimination, or antagonism directed against a person or people on the basis of…

As a general rule of thumb, if you ever find yourself having to explain why something you did or said wasn’t racist, it’s usually a pretty good indicator that it was.

Also, rather than consulting the dictionary for help in resolving the matter, a better strategy is to just say you’re sorry and then do better in the future.

This isn’t the first time Lucas has posted something racist on social media either. Last August, he posted a picture of nooses under a Facebook story about a black man pleading guilty to rape. He also said that wasn’t racist.