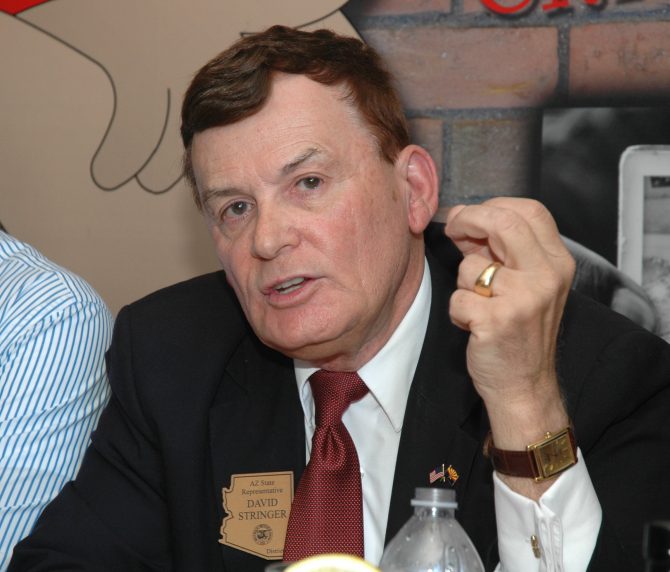 Stringer, who holds at 0% rating with the Stonewall Democrats of Arizona, a political group that advocates for issues relevant to LGBTQ Americans, has been fighting an ethics investigation into alleged sex crimes he committed back in the early 1980s.

A Baltimore police report from 1983 was released by the Arizona House of Representatives, which had been investigating Stringer’s past sex-crime charges.

The report states police arrested Stringer in September 1983, after a boy told detectives that Stringer had met him and a friend in a park a year earlier, and asked them to come back to his apartment to have sex.

Stringer allegedly paid the boys $10 after he performed oral sex on them and had them perform the same act on him, according to the report.

When the boy’s father learned of what was going on, he contacted police and Stringer was arrested.

Stringer, who was 36 when he was arrested, was charged with eight counts of sex crimes. He later accepted a plea deal on some combination of charges and was sentenced to five years of supervised probation.

He also was required to seek admission to what appears to be a treatment clinic for sex offenders.

But few details of Stringer’s sentence are known because a Baltimore judge expunged the case in 1990, erasing the court records.

Last Wednesday, the 71-year-old abruptly resigned from office after he refused to cooperate with ethics investigators after they filed a subpoena demanding records related to his sex charges.

On Saturday, Stringer ook to Facebook to voice is outrage and to say he was “forced to resign” against his will.

In an angry post published at 3 AM, Stringer insisted the allegations “had no basis in fact.”

“What I will say is that the charges I faced in 1983 are as false today as they were 35 years ago,” Stringer raged, before calling what has happened to him totally “unfair.”

Stringer has repeatedly stated that he was never convicted of any crime and has accused the media of peddling false information.

“There is no guilty plea, no conviction,” he told Prescott eNews back in January. “I have no record; I have done nothing wrong.”