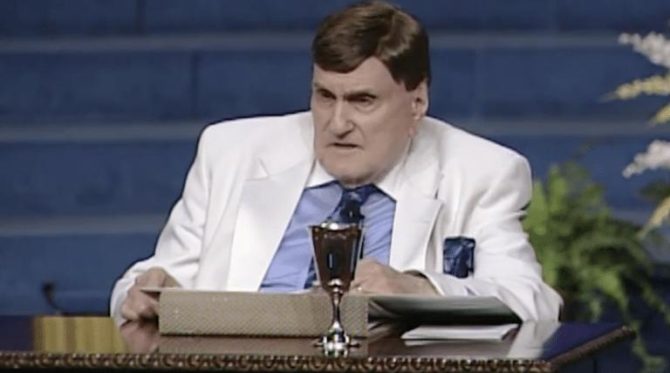 Pastor Earnest Angley is a real piece of work.

For years he’s led the Grace Cathedral church in Akron, Ohio, where he’s espoused antigay rhetoric and made it a habit to manipulate and take advantage of his parishioners.

The 97-year-old glorified conman has been on the receiving end of many damning accusations, from sexual abuse to employing illegal unpaid labor to coercing a 76-year-old believer with dementia to write a check for $340,000.

Now a newly public audio recording shows Angley to be a hypocrite in another classic antigay fashion. While regularly preaching that homosexuality is a sin, and potentially inflicting real damage on queer youth whose parents subjected them to Angley’s ramblings, it turns out the pastor was having gay sex on the side.

An anonymous source supplied the 23-year-old recording to the Akron Beacon Journal. On it, the pastor speaks with Rev. Bill Davis. Davis is upset with Angley for spreading a rumor about Davis’ wife being “vulgar”, and accuses Angley of having gay sex, which Davis calls “vulgar.”

Angley denies the story is true — but only the part where Davis implies Angley and his male sex partner both ejaculated.

Davis: “Well, you was both naked in that bed.”

Listen to the clip below:

And just like that, the “antigay douchebags caught having gay sex” club inducts its latest member. It sure is getting crowded in there.

As if that’s not enough, here’s a former mentee of Angley sharing what it was like to be sexually abused by the televangelist: