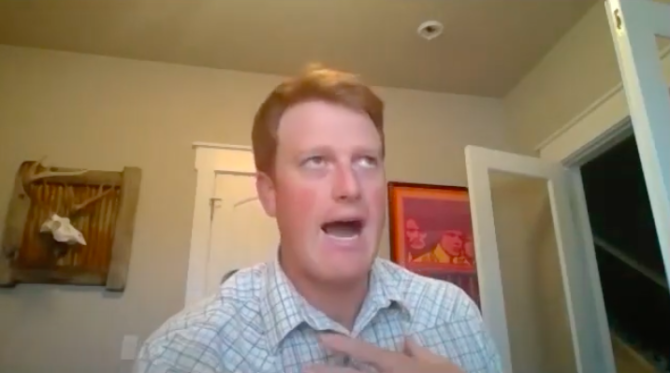 The GIF was from the movie Blazing Saddles and featured actor Cleavon Little, playing a Black sheriff, asking, “Where the white women at?”

Western, who deleted his tweet after an outpouring of criticism, said that it was intended to be a reference to the film and was not intended to disparage Appelhans. In the film, Little played protagonist Sheriff Bart, a former slave who challenges the racist sensibilities of an all-white town in a satirical lampooning of the racism often obscured by Hollywood’s depictions of the Old West.

After deleting the tweet, Western issued an apology, calling his actions “dumb and uncalled for” and saying he left Appelhans a voicemail apologizing for it.

“I’d like to issue a retraction,” Western wrote. “My remark about the new Albany Sheriff was dumb and uncalled for.”

“What I did was insensitive, and, while unintended, I recognize that it was wrong,” he added. “I hope he accepts my apology.”

What I did was insensitive, and, while unintended, I recognize that it was wrong. I hope he accepts my apology.

In a followup interview, Western called his actions “stupid” and said he “wasn’t really thinking.”

“There was never any kind of malice or anything,” he explained, “and it was only afterwards I realized that it was really dumb.”

But this isn’t the first time Western has done something “really dumb.”

Last year, he voted against a bill that aimed to protect LGBTQ workers from discrimination. And on his campaign website, he bills himself as a “family values” candidate with an “an uncompromising stance on the conservative principles.”

Appelhans tells the Casper Star-Tribune that he has accepted Western’s apology and that he believes the lawmaker “definitely knows what he did was wrong.”

“We definitely had a conversation about—how do I say it—his tweet and the connotations of it as well, racist connotations,” he said. “I basically told him I have expectations for him and I’m looking forward to him meeting those expectations and be better.”