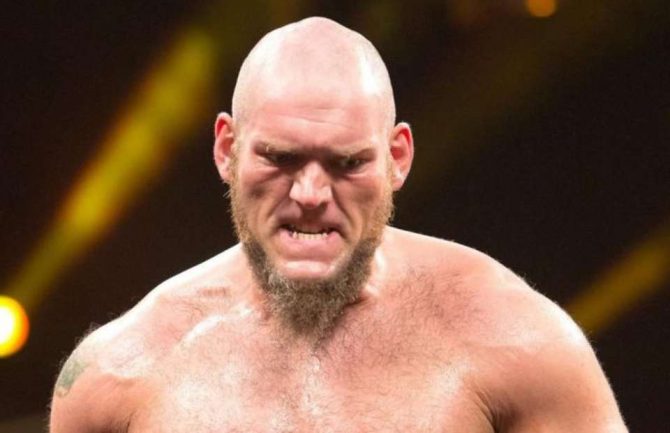 WWE SmackDown star Lars Sullivan was exposed as a total bigot this week after past comments he wrote on an online message board resurfaced.

Ring Side News reported that Sullivan, whose real name is Dylan Miley, posted dozens of racist, sexist, and homophobic remarks under two different usernames on a message board at BodyBuilding.com between 2007 and 2014.

I don’t actually have any true hateful feelings for gay people, but it’s just a part of my sense of humor I like to explore. Homophobia, racism, sexism, these are all hilarious things to make light of in the right environment (among other straight men).

Every time I hear a man say that pussy smells like **** I cringe because I automatically assume they’re a closeted homosexual repressing their true intuitions.

He also said that if one of his co-workers ever came out as gay, he would “draw the line and make him feel like a worthless outcast of society.”

But that’s not all.

You can read a comprehensive list of of Lars’ past remarks here.

In a statement released through the WWE yesterday, Sullivan addressed his past remarks in a hollow two-sentence apology that read: “There is no excuse for the inappropriate remarks that I made years ago. They do not reflect my personal beliefs nor who I am today, and I apologize to anyone I offended.”

There was no promise to do better in the future or planned efforts to make good with any of the communities he disparaged. No talk of working with any non-profit organizations dedicated to combating hate and bigotry or donating even a small portion of his WWE salary to some worthy cause.

Just a curt “I apologize to anyone I offended.”

The apology doesn’t appear to have cut it for many WWE fans who are still upset by Sullivan’s past remarks.

To be honest #LarsSullivan should not be working for #WWE it’s extremely infuriating to know that he belittled people he now works with in a disturbing way. Racism should not be tolerated ever! @WWE @WWEUniverse

So @HulkHogan gets fired for saying fucked up shit in private, apologizes repeatedly for years until he is finally let back. Lars says a lot of fucked up shit openly & barely apologizes. No punishment. Yeah, fuck off @LarsSWWE and fuck you @WWE @VinceMcMahon This is bullshit #WWE pic.twitter.com/8gVcFrJaOL

So Apparently #LarsSullivan apologized for those offensive remarks he said in the past. Yeah, I don't buy it! It's because you are a public figure now, you are sorry! #WWE is such a bullshit company for hiring this jackass!

“It is zero mystery in WWE that he did this,” he said. “They knew this when they hired him. They have known this forever. They are not going to fire him.”

“In WWE’s minds, he did this and he apologized for it. He told them that he was wrong and that he was remorseful and in their minds. It is a done deal.”

And according to WWE insider account @WrestleVotes, it’s likely officials “aren’t going to do a damn thing” about the matter.

Talked to one of my main sources regarding this Lars Sullivan stuff. Source states WWE is aware of what’s making the rounds online. His exact words: “they are hoping it stays low and disappears”

My take: they aren’t going to do a damn thing. Hope I’m wrong.

Given that the majority of WWE is owned by the McMahon family, who are major Trump supporters, it’s really not surprising that they don’t care if one of their star performers has a past history of bigotry.