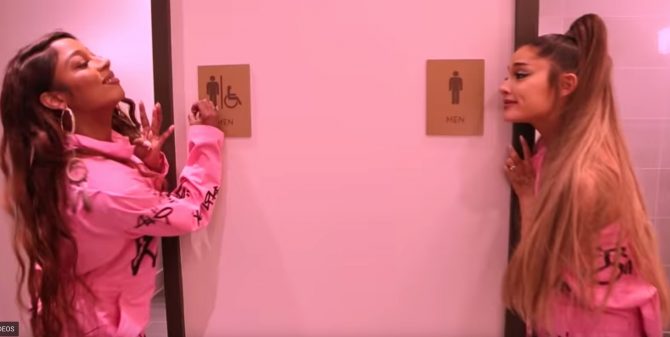 Is that a ‘get out of jail free card’ or a ‘gay card’ in Ariana Grande’s pocket? Or is she just happy to see us?

Can’t it be a little bit of all three?

The “thank u, next” singer and (to some vigilant Twitter soldiers) controversial Manchester Pride headliner released a new single on Monday, “Monopoly,” with Victoria Monét, and many fans are interpreting the lyrics to mean Grande is having a bit of a coming out moment. That seems to be the fashionable way to do it these days.

“I like women and men/ Work so f*ckin’ much, need a twinny twin twin,” Grande sings on the track. For what it’s worth, Monét, who previously worked with Grande as a co-writer on “NASA,” “7 rings,” and “thank u, next,” sings the same lyrics in “Monopoly” and explicitly came out as bi on social media last year:

While “Monopoly” was released on April 1, the song’s lyrics popped up on Genius over the weekend and began to make the rounds on Twitter, stoking speculation that Grande would be “coming out.”

And because April 1 is the day society deems it appropriate for adults to lie to one another in the name of fun, some thought it was all a prank.

Grande addressed that on Monday:

why the whole fuck would this be an april fools joke there’s so much to celebrate and to say thank u for ! seriously ! we mean it. you’re getting a song today. period. love u.

Grande has been nothing if not open about her past relationships, even namecalling her major boos in her breakup anthem, “thank u, next” — Big Sean, Ricky Alvarez, the late Mac Miller, and Pete Davidson. [Editor’s note: those are all guys.]

The lyrical tease comes on the heels of the February release of her video for “break up with your girlfriend, i’m bored,” which ends with Grande kissing a girl.

If the whole thing feels shaky and designed to stoke chatter, that’s because it probably is. But is a mainstream artist playing with society’s obsession with labeling celebrities’ sexuality necessarily a bad thing?

Some have accused the pop star of queerbaiting — intentionally manipulating LGBTQ audiences as a means to profit off their hard-earned coins. Not cool.

Then again, Grande has vocally supported queer artists and causes, so what’s the big deal if she wants to sing about liking girls?

Here’s how she responded after a virtual pitchfork-wielding Twitter crowd hung her up to dry for daring to agree to perform at Manchester Pride (adding to the brouhaha was the fact that ticket prices also happened to rise, though the two things have not been connected):

i saw many people discussing this so i wanted to chime in…. hope that’s okay ?? pic.twitter.com/7joiZwI1QS

But if you’re looking for a label to stamp on her, Grande isn’t going to go that route, at least not now.

i haven’t before and still don’t feel the need to now ?????? which is okay

So take what you want from the new track, “Monopoly,” or take nothing at all. Your call.

Either way, you can watch/listen below: