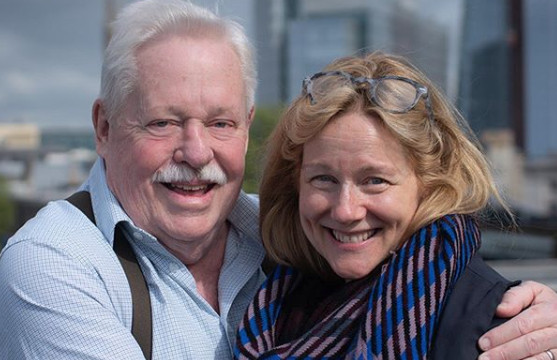 Who He Is: Author, activist

How He’s Contributed: Maupin grew up in North Carolina as the son of a powerful lawyer. After serving several tours in the Navy, including a stint in Vietnam, he landed in television journalism, working for future right-wing Senator Jessie Helms. Helms and Maupin would later become arch rivals during the AIDS crisis when Helms opposed HIV research and referred to gay men as “morally sick wretches.”

Maupin came out in 1974. Around the same time, he began writing Tales of the City, stories serialized in the San Francisco Chronicle revolving around a diverse group of friends living in the same San Francisco apartment building. The stories earned wide acclaim for their loving portraits of Maupin’s chosen city and for their groundbreaking portrayal of the warm family values of gay life. He would later migrate the stories to novel form, penning a whopping nine books over a period of 30 years. The books drew a generation of gay men and lesbians to San Francisco, looking for their own form of the community Maupin lived and imagined.

The series would also see three television adaptations beginning in 1993—Tales of the City, More Tales of the City, and Further Tales of the City—starring Laura Linney and Olympia Dukakis. A final installment premieres on Netflix in June. Maupin’s semiautobiographical novel The Night Listener became a film in 2006, starring Robin Williams in one of his best performances. Through it all, Maupin remained a vocal advocate of equality through the height of the AIDS epidemic to the present day. He became one of the first fiction writers to address the subject of HIV in Babycakes, the fourth Tales installment. Trans characters played key roles in his early books, but by the time the Netflix series came around a new creative team was updating the vastly less white and less cisgender male world that Maupin created.

Why We’re Proud: Forty years after its inception, Tales of the City looms as one of the defining works of American literature because of the breakthrough positive portrayal of gay characters. The eccentric residents of Barbary Lane feel like real, warm-hearted friends who just happened to stop by for a drink, toke, or dinner. This was a massive shift from earlier literary portraits of queer people as pathetic, lonesome or even evil who end up dead in the end.

Instead, Maupin drew his characters as often more full of life, community, and warmth than their non-gay counterparts and the lives they left behind in less diverse and even repressive parts of the country. Both the novels and subsequent TV series have given LGBTQ people a roadmap to the communal and social joys of gay life, not just the sexual ones, often overlooked by the mainstream.

The message: You can create your own family and live a life full of love, adventure, and friendship. It’s good to be gay.

When I came along and started to write, the image presented in gay literature was pretty damn grim. And soon I realized that it didn’t have to be that way. If you chose your friends carefully and behaved in a way that was worthy of love, then you could escape from that terrible fate—of being a depressed old queen. And you know, I have my ups and downs like anyone else, but I’m happier at 63 than I’ve ever been because I know more about myself.

New guy in town. Snapshot by the hubs.