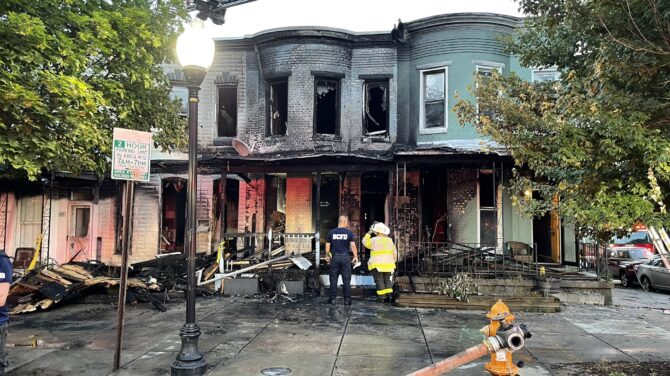 Pride decor was set ablaze at two homes on the same street in Baltimore early Wednesday morning, leading to multiple homes going up in flames and three people in serious need of hospitalization.

The investigation is still underway, but it seems that initially one home’s Pride flags were set on fire:

Pride flags set on fire early this morning. 3 houses destroyed and people in the hospital. 31st and Barclay, Baltimore. FBI and ATF investigating. My friend Todd’s flag melted, without burning his house down. pic.twitter.com/0g3q5Lz7sK

Shortly after, the home across the street (also sporting Pride decor) was completely set ablaze. The latter is the fire that spread to two adjacent homes and left three people hospitalized in serious and critical conditions.

Here is what #BMORESBravest saw as they arrived at the fire on E 31st this morning. Fortunately, everyone made it out of the 3 homes. #BCFDEMS transported 3 people to hospitals for check ups. pic.twitter.com/cvx2hIXT8n

According to CBS Local News Baltimore, it was initially reported that Baltimore Police and Fire were investigating the arsons as hate crimes (for obvious reasons), but in a news briefing Police Commissioner Michael Harrison would only say the causes are “still being investigated.”

This latest anti-LGBTQ attack comes on the heels of increasingly constant violence against the community.

Just this past weekend Proud Boys stormed a Drag Queen Storytime event in the Bay Area threatening violence and dozens of members of right-wing extremist group Patriot Front were arrested on-route to terrorize a Pride in the Park event in Idaho.

The investigation is still developing, and we will update as further information becomes available.