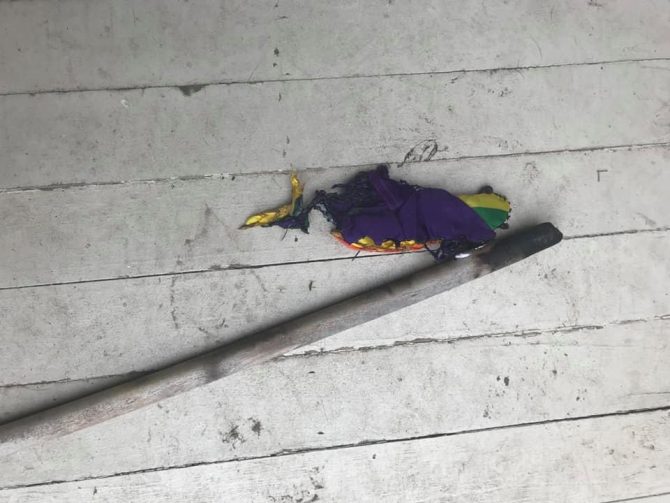 Police have opened an investigation into an act of arson in Riverside, Kansas after a family reported a Pride Flag outside their home had been set ablaze.

Zachary and Micala Gingrich-Gaylord are not a queer couple, but kept the flag displayed outside their home in solidarity. Nevertheless, the Gingrich-Gaylord family became the victims of an anti-gay hate crime when an arsonist set their flag on fire over the weekend while they slept.

“Last night between 12 midnight and 7 am someone set our pride flag on fire,” Micala Gingrich-Gaylord posted on Facebook. “After it was stolen last week many folks in our neighborhood put up flags. Police and news have been called. This is so far beyond vandalism and falls squarely into a hate crime. Please watch out for one another. This could have set our home on fire.”

“It’s a scary thing,” Micala added in an interview with The Sunflower. “My husband thinks they wrapped the flag around the pole before they set it on fire.”

Police will post flyers around the neighborhood asking for tips about the crime. They’ve also notified their LGBTQ liason, who will remain apprised of the situation.

Despite the scary situation, the Gingrich-Gaylords will keep the flag displayed at their home. “I ordered four more right after, and then Micala ordered four more,” Zachary said. “Well, what are you gonna do? Not get more flags? I mean, it’s scary, but it’s also important to stand up to fascism.”