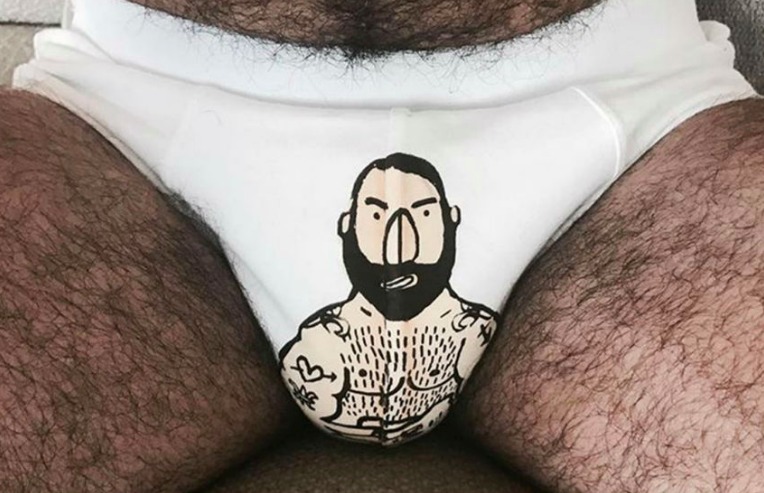 Meet Carlos Radriguez. He’s an illustrator from Mexico City who has found a way to profit off his love of very hairy men.

“My parents worked as primary school teachers and at home there were always color markers, cardboard and chalks,” he tells Gay Star News. “So, I started to draw – wild animals and houses. The penises came after.”

After graduating with a degree in graphic design, Rodriguez moved to Mexico City in search of “a job, guys, and adventures … and I can say I found a lot of them!”

First, he met his partner, Gustavo. Then he started freelancing for a number of ad agencies.

“When I was dismissed from my last job I started selling painted underwear and customized notebooks illustrating sexual fantasies,” he says. “Thanks to social media, people began to take an interest.”

“Instagram has become the biggest platform to make yourself known globally,” he says. “Either by your work or by showing your ass. Or in my case, both.”

For the past two years, he says, he’s been focusing his art on his “obsession with the penis, male anatomy and body positivity.” But that hasn’t been without its challenges.

“You have to know how to avoid the censorship that exists around the male nude,” he says. “Instagram has closed my accounts five times in the past because they say that my drawings are offensive.”

In addition to his illustrations, Rodriguez has also begun working with ceramics and selling merch, including notesbooks, stickers, and even underwear.

Scroll down for a sampling of Rodriguez’s work…

saturn and the melancholy

??? taking a shower and also learning some anatomy ? #maleanatomy