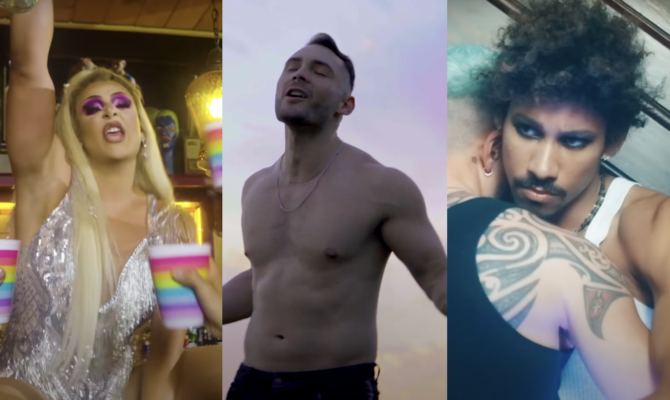 Queerties voting has opened once again, and we can’t wait to announce the winners and celebrate at our awards ceremony on March 1.

Of course, it’s important to be an informed voter. So we’ve compiled a handy list of all the videos nominated for Best Indie Music Video for your viewing and listening pleasure. Each tune features the stylings of a queer artist, sharing their truth, and singing out and proud.

Vote now for Best Indie Music Video in the Queerties through February 22.

And now, the nominees (in no particular order)…

The world famous drag queen never fails to disappoint with any of her musical offerings and this one is, of course, no exception.

“If I Could Go Back” by Kameron Ross

The America’s Got Talent alum’s rock-infused country tune pays homage to small-town love. He’s also shirtless for most of the music video.

This barn-burning, head-banging ode to living out loud and indulging in fabulousness is a folk-blues power track.

He can sing. He can dance. He can act. Seriously, is there anything Keiynan Lonsdale can’t do?

(Put Your) “Gay Hands Up” with Jan, Alaska, and Peppermint

When these three queens join forces, you better do as you’re told. Put those gay hands up, bitches!

Anyone wishing for a grittier, more self-reflective Todrick Hall-style dance-pop should look no further than Sean The Star Emperor.

A non-binary pride anthem about loosening the gender ties that bind us.

Matt Palmer’s “I Don’t Want It”

Matt Palmer sings about breaking up with his boyfriend while lying on a sofa in a singlet. Need we say more?

Brandon Anderson’s electro-pop track about online love doesn’t even need an elaborate video to stir an overwhelming desire to dance.

Michaela Jaé has “Something To Say”

The Pose star channels the ’80s pop of Debbie Gibson, the upbeat pep of Selena, and the sensuousness of early Janet Jackson into a sunny pop ballad.

Vote now for Best Indie Music Video in the Queerties through February 22.