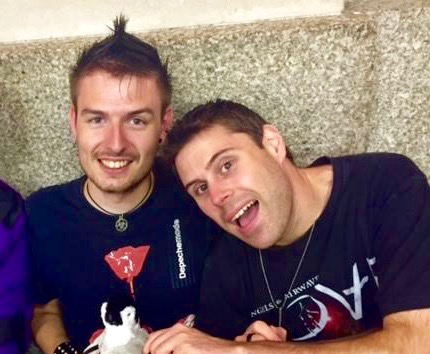 Steve Winter and his fiancee Thom Gray are like any other same-sex couple who are hopelessly in love. They enjoy spending time together, doting on their cat, Jacx, and are busy putting the final touches on their wedding planned for later this month.

There’s just one difference… They don’t have sex.

Steve tells HuffPost he first discovered asexuality a few years ago, when he was 31. Up until then, he just thought sex was, well, kinda dumb.

“In all honesty,” he explains, “I never had any real desire to want to start sticking things into people or for the experience to be inflicted upon myself.”

26-year-old Thom has a similar story. Sex never interested him either. He discovered he was asexual at age 21.

“I knew quite soon after coming out as gay that I had misjudged my desire to go out with guys,” he explains. “Looking back, I realized I have always been asexual, but it sadly it took some bad experiences whilst identifying as gay to find that out.”

According to the all-knowing Wikipedia, asexuality is “the lack of sexual attraction to anyone, or low or absent interest in sexual activity. It may be considered the lack of a sexual orientation, or one of the variations thereof, alongside heterosexuality, homosexuality, and bisexuality.”

Both Steve and Thom identify as “homoromantic” asexuals, meaning they experience romantic feelings towards members of the same-sex, but those feelings stop between the candlelit dinner and the bedroom.

“Being homoromantic means that both myself and Thom are romantically attracted to the same gender–namely each other,” Steve says.

Related: Asexuals are tired of your crap, demand greater visibility

“Romance is not mutually exclusive to sex for a lot of people,” Thom adds. “But as asexuals we promote the fact that you can have sex without love, so why not love without sex?”

“Celibacy is a choice,” he explains. “Asexuality, like being gay, straight, bi, trans, etc., is how you are wired. Quite simply, you are born this way!”

The guys say that a lot of people are confused by the relationship, until they actually see them together and realize they’re just like any other couple.

“People are so surprised when they see Steve and I together,” Thom says. “They realize we are like any other couple. The reality is, we do everything a couple does except sex.”

But, he says, “what does or doesn’t happen behind closed doors does not define a relationship.”

And to all you asexual deniers out there, they have this to say:

“It’s a real shame that a lot of people dismiss new identities so quickly,” Thom says. “It wasn’t that long ago that terms like ‘gay’ and ‘lesbian’ were new, too! If we treat every new term with dismissal before gaining an understanding of what the term means, we will never be accepting of minorities.”

“I personally wouldn’t dream of trying to force my own thoughts or beliefs onto anyone else’s lifestyle choice, gender identity or sexual orientation,” Steve adds.

Related: This married gay asexual is not interested in having sex with you, his husband, or anybody else