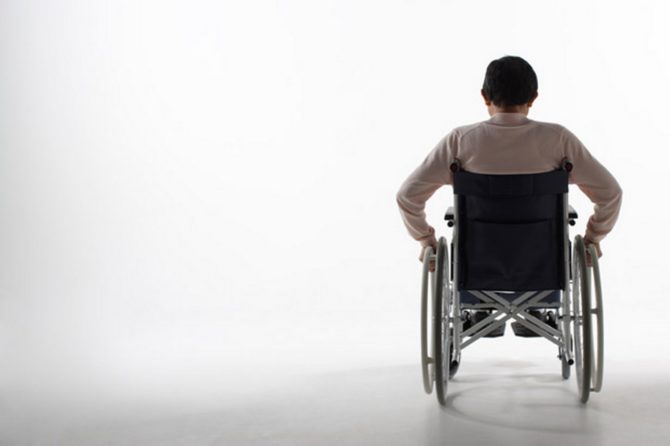 How much would you give to put the (wheelchair) brakes on a Trump presidency? It is a question afflicting many gay and disabled individuals such as myself in the days following Trump’s official inauguration.

It is estimated that nearly 50 million American adults aged 18 years and older are affected by disabilities, according to the CDC. While the exact number of disabled and LGBTQ individuals is hard to determine, there is no denying that the feelings surrounding Trump’s presidency remain the same for many disabled, LGBTQ people. Hint: They aren’t good.

Related: What It’s Like To Date Someone Who Is Disabled (According To My Non-Disabled Exes)

“Honestly I haven’t even fully processed [Trump’s win],” says Paul Wright, a gay and disabled accountant with from Seattle. “I just have this overall feeling of anxiousness, and that’s hard to figure out.”

Wright was born with arthrogryposis, a physical disability that limits the functioning of ones joints. It is the same disability as shared by Serge F. Kovaleski, The New York Times reporter Trump allegedly mocked in a video that went viral in 2015. Paul remembers the video vividly.

“I remember when it came out and learning he had the same disability [as me],” Wright says. “It shocked me. I already thought [Trump] was awful, but it just felt so much more personal. It’s a rare disability and for it to be in the news [in that context] was just so overwhelming.”

Kyle Ankney, a 26 year-old gay man born with cerebral palsy, says his worries about a Trump presidency only intensified on election night. “Watching the results on election night, I was in complete shock; completely disheartened,” he says. “I couldn’t believe that the country I’ve always called my home, was going to be governed and represented by an individual who continually mocked my core identities.”

For other disabled individuals, Trump’s presidency goes beyond mere anxiety.

In a personal essay written two days before Trump’s inauguration, Julia Bascom, Executive Director of the Autistic Self Advocacy Network, talked about how, as a disabled individual (whose sexuality is never specified), she was “terrified” of Trump’s administration. But it wasn’t the Trump-mocking video that kept her awake at night, she said–it was the repeal of the Affordable Care Act (ACA).

More than 10 million persons living with physical or mental disabilities require costly ongoing assistance with day-to-day or other instrumental activities, according to a study by the American Public Health Association. For many of these individuals, including Bascom, the Affordable Care Act was a godsend.

“The ACA is arguably second only to the Americans With Disabilities Act when it comes to game-changing disability rights law.” Bascom wrote. “No insurers would meaningfully cover [disabled individuals], so many disabled Americans historically had to live in poverty in order to qualify for Medicaid. By banning discrimination against people with pre-existing conditions, the ACA made it possible for millions of Americans with disabilities to enroll in commercial insurance, afford needed medical care, move, and change jobs.”

As for the future, several disabled LGBTQ people remain hopeless, both in the United States and abroad.

Josh Hepple, a gay, disabled resident from the United Kingdom, says he is glad to live across the pond. “I’m glad I’m in the U.K., as I think a country lead by hate is very disturbing,” he says. “I’m sad that someone who teaches hate can be so popular.”

Wright, the Seattleite with arthrogryposis, agrees, and remains perplexed by the current political climate.

“A lot of people are saying things wont change,” he says. “But the fact that I have to even question my rights [as a gay and disabled individual in the era of Trump] in the first place is both concerning and scary.”

Disorder in the court
22