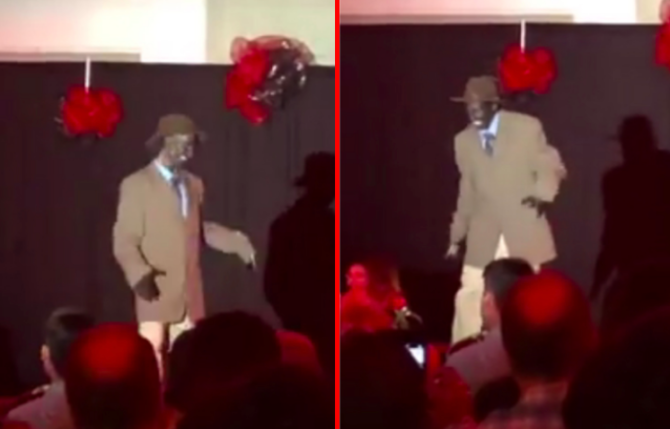 Video of a drag king performing in blackface at a youth fundraiser in Hawaii has hit the internet and it’s truly cringeworthy.

The racist performance happened at Kauai Beach Resort last Friday during “A Show Fit for a Queen,” a charity event hosted by several local drag performers to raise money for a local youth suicide prevention group.

The lineup included several popular local queens, as well as the “Special Guest Male Impersonator” by the name of Muddy, The King of Memphis.

But when Muddy hit the stage, the crowd was horrified.

The 20-second clip, which was posted to Facebook by Gary Clayton Brown, who was in attendance at the show, shows the performer dancing to “Bad To The Bone” by George Thorogood.

2018: Drag King just came out in black face…WTF Hawaii?!?Update: A lot people with questions. I have no idea what organizers knew ahead of time. This was not at a bar, some event space for the fundraiser. The organizers did cut the spotlight and music about 45 seconds into their performance. It looked like this person had two other numbers on the set list but they cut them from the show.

“I have no idea what organizers knew ahead of time,” Brown writes. “The organizers did cut the spotlight and music about 45 seconds into their performance.”

Brown adds that Muddy had two other numbers listed in the program but never appeared on stage again after his first performance.

Matt Sagum, one of its promoters, took to Facebook to explain his side of the story: “I arrived 20 minutes late. When I got backstage I didn’t notice her at first. Once I got settled in, I looked up and saw.”

“One of the other queens pulled me aside and was like ‘WTF is that?!’ To which I had no response other than ‘That is not going to fly’. By the time this conversation ended it was my turn to go on stage.”

“I finished my number and immediately went to the show organizer. I told her either Muddy goes or the rest of us are out of here. The organizer had her leave and the rest of the numbers were canceled.”

The identity of the person who played Muddy remains unknown.