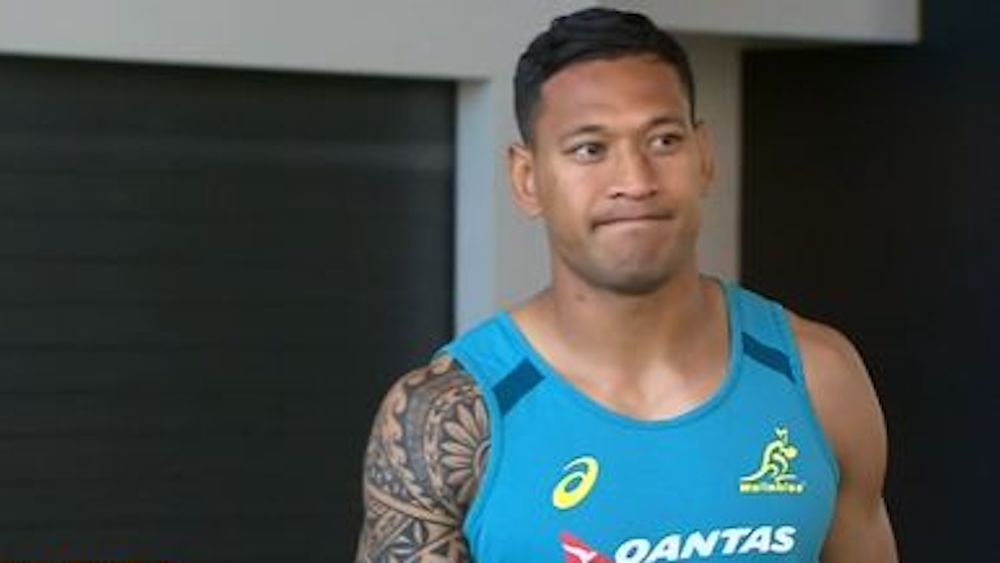 Just yesterday, we predicted that 30-year-old, Mormon-raised, Australian professional rugby player Israel Folau wouldn’t face any consequences for recently telling his his 330,000+ Instagram followers that “hell awaits … homosexuals.” Looks like we were wrong.

In a joint statement, Rugby Australia and New South Wales Rugby (the organizing bodies that employ Folau and oversee his team, the New South Wales Waratahs) announced that it will terminate Folau’s contract for his anti-gay rant.

Furthermore, Australia’s National Rugby League Commission chairman Peter Beattie said that Folau won’t be welcome on any national team ever again, meaning that he’ll have to move out of the country if he wants to continue his brand of homophobic athleticism.

“Rugby Australia and the New South Wales Rugby Union have made repeated attempts to contact Israel both directly and via his representatives since 6.30pm on Wednesday, and at this point he has failed to communicate directly with either organization.

Whilst Israel is entitled to his religious beliefs, the way in which he has expressed these beliefs is inconsistent with the values of the sport. We want to make it clear that he does not speak for the game with his recent social media posts.

Israel has failed to understand that the expectation of him as a Rugby Australia and NSW Waratahs employee is that he cannot share material on social media that condemns, vilifies or discriminates against people on the basis of their sexuality.

Rugby is a sport that continuously works to unite people. We want everyone to feel safe and welcome in our game and no vilification based on race, gender, religion or sexuality is acceptable and no language that isolates, divides or insults people based on any of those factors can be tolerated.

As a code we have made it clear to Israel formally and repeatedly that any social media posts or commentary that is in any way disrespectful to people because of their sexuality will result in disciplinary action.

In the absence of compelling mitigating factors, it is our intention to terminate his contract.”

The LGBTQ sports blog Outsports notes that Folau’s comments violated Rugby Australia’s 2014 inclusion policy which states, “There is no place for homophobia or any form of discrimination in our game and our actions and words both on and off the field must reflect this.”

But Folau’s most recent anti-gay comment was one of several throughout his career.

Just this week, when the Australian region of Tasmania passed legal protections for trans people, Folau tweeted, “The devil has blinded so many people in this world, REPENT and turn away from your evil ways. Turn to Jesus Christ who will set you free.”

During his 29th birthday, Folau said on Instagram that God’s plan for gay people was “HELL… Unless they repent of their sins and turn to God.” During Australia’s public postal plebiscite on same-sex marriage, Folau tweeted, “I love and respect all people for who they are and their opinions. but personally, I will not support gay marriage.”

That same year, Folau doubled-down on his anti-gay comments in an 11-minute video which showed footage of a Pride march and the White House lit in rainbow colors. The video stated, “Now is the time to get right with God because this generation has lost the fear of God. There’s no fear of God left in the land.”

When Folau was criticized for his anti-gay comments, he responded, “This is not about money or bargaining power or contracts. It’s about what I believe in and never compromising that, because my faith is far more important to me than my career and always will be.”

Now that his sports career is more or less over in Australia, he’ll have lots of time to consider the importance of his faith.

You can also start counting down until an anti-LGBTQ group holds him up as a martyr to “the intolerant left.”