Author Ryan Douglass’ first novel “The Taking of Jake Livingston” was an instant bestseller when it was released in July, debuting at #6 on the New York Times Bestsellers list. Today, it remains a top seller and Editor’s Pick on Amazon.

The book has been described as “Get Out meets Holly Jackson.” It tells the story of a gay Black teenager at an almost all-white prep school who sees dead people and it’s perfect Halloween reading.

Queerty had a chance to chat with Douglass about the book, whether he himself can see dead people, and why Halloween and the horror genre are so popular among LGBTQ audiences. Here’s what he had to say…

QUEERTY: So, it’s Halloween! What’s the best costume you’ve ever worn? And do you have a picture you can share?

DOUGLASS: I’m really into the Nightwing costume I got for this year! It just came in, my butt looks great in it, and I never want to take it off. Makes me want to fight crime in a real way. 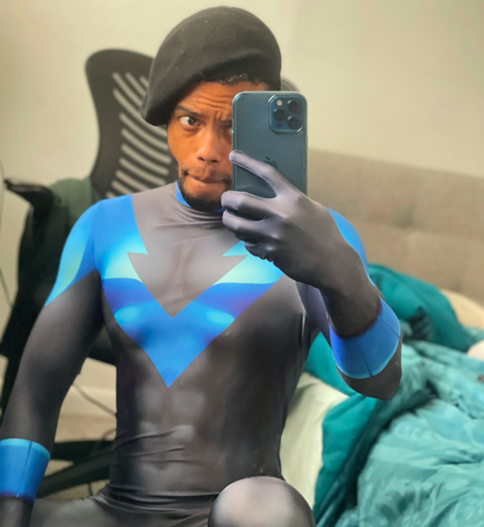 Love it! So, your debut novel “The Taking of Jake Livingston” was an instant NYT bestseller when it was released. It tells the story of a teenager who sees dead people. But it’s not just a horror novel. It tackles some serious themes including race and racism, sexuality, bullying, and social isolation. On top of that, it’s super entertaining. (I read it in a day!) What’s the response been like?

Thank you for reading it! The response has been incredible because there are people who really love the book and people who don’t like it at all. Some people feel inspired by the no-holds-barred approach to its themes and some are appalled by how triggering it can feel for a YA book. I like that it’s sparked conversation. It means I made bold choices and committed to them. I can tell that queer people and especially Black queer people see themselves in it, which is very important to me, and even those who can’t relate to the struggles of the main character are learning and entertained by it.

I’m guessing you can’t see dead people (right?), but I’m curious… Did you draw from any of your own personal experiences while working on the book? What, if any, parts of the story are autobiographical?

I can’t see them in the way Jake does but I do sense presences. I think a lot of people have this ability and kind of write it off—that sense that someone has walked in, and is lingering there, examining you, or sometimes they come in and then leave pretty quickly. We just say it’s the wind, or our own paranoia. The worldbuilding in this book adds flesh to that feeling. I’ve always had vivid nightmares and seen sleep paralysis demons as well, so some of the dead world creatures and astral projection sequences come from my childhood nightmares. Jake’s internal monologue is pretty much pulled from my teenage mind as well.

The book includes some scary scenes involving ghosts, but some of the most haunting parts are actually the times when Jake interacts with his racist classmates. What was it like to write those scenes?

In revisions I was constantly asking myself how I wanted to represent the racism. It was too sensationalized in the first version and I didn’t want to do that because there’s no need to add more trauma porn to Black stories. But trauma is real for us, so I wanted it to be there but be as authentic as possible. It sometimes feels like you’re not doing enough as the writer when you represent real life as it happens, but it’s better that way because it immerses the reader in reality. I can then heighten that through the paranormal, and Jake’s voice. The stream-of-consciousness narration I think validates an intersectional voice that is silenced, and creates more empathy and understanding in people who don’t deal with the same things.

The horror genre is obviously super popular, but especially among LGBTQ people. Characters like the Babadook and Pennywise have been dubbed gay icons and Halloween has been declared the “Gay Christmas.” Why do you think that is? What is it about the genre that resonates so deeply with LGBTQ people?

I think it’s partly that gays love dressing up and that we’re a colorful and expressive community. I also think LGBTQ people who don’t grow up with safe spaces are accustomed to fearing for our lives. We fear that we will be on the receiving end of violence for who we are, and that intense sense of fear is reflected in horror characters. On the other side of that coin, we relate to monsters because we’re treated like monsters. Especially when those monsters have style and flair, like the Babadook or Pennywise. We’re constantly “damned to hell” by the uber religious, and some of us, to overcome that persecution, create a sort of kinship with “hell”, or being “demonic.” It becomes this sexy thing because it’s dark, powerful, underground, and rebellious.

It’s so hard for me to think of many queer horror characters who survive. I really resonated with DJ Walters from Monster House so I’m gonna pretend he just wasn’t out during the movie’s run time. I’m also a fan of the boyfriends in ParaNorman.

I always draw a blank in thinking of teen actors who are Black boys, especially queer boys, since our stories are so underserved by Hollywood and our talent overlooked. I would say Justice Smith for Jake, but he’s in his mid-20s now. DeRon Horton for Allister, but he’s nearing 30. It would be awesome if we could cast new talent and set off their careers with the film. That’s a dream of mine—creating opportunity for young Black actors, and giving them a chance to really perform in their roles rather than be in the margins.

What’s something you learned from Jake?

I learned to rise above scary challenges, to be bigger than the toxic cycles we find ourselves trapped in, to express love to the people I care for, and to listen to the ancestors when they speak to me.

Yes! A huge thank you to you and Queerty for giving me this opportunity to speak about my book. It’s a dream come true. I am immensely grateful to anyone who’s read it or plans to read it. Authoring is the only career I have so all of this matters a lot! I take none of it for granted! So, thank you so much.