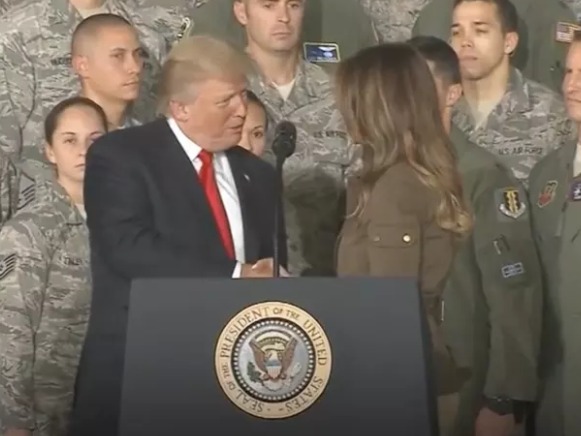 So Donald Trump gave a speech at Andrews Air Force Base in Maryland last Friday and it was suuuuper awkward. He brought Melania along to introduce him. After welcoming her husband to the stage, the married couple shook hands and… Wait, what?

That’s right, folks. No warm embrace. No peck on the cheek. It was firm, mechanical handshake before Trump gave her a nudge toward the exit and Melania robotically walked off stage:

Let’s take a closer look, shall we?

Trump then proceeded to launch into his speech completely unfazed:

Twitter quickly took notice. Check out what people have been saying…

Like my father always taught me: Find a woman you love, look her in the eye, and give her a firm Business Handshake https://t.co/1vkViJPimr

Did he give a slight push out the way? pic.twitter.com/Dh6iT8DAAy

My wife and I shake hands goodnight every night.

Ah yes, a handshake, so intimate, thank you very much husband sir, my misery is palpable, solid deal sir