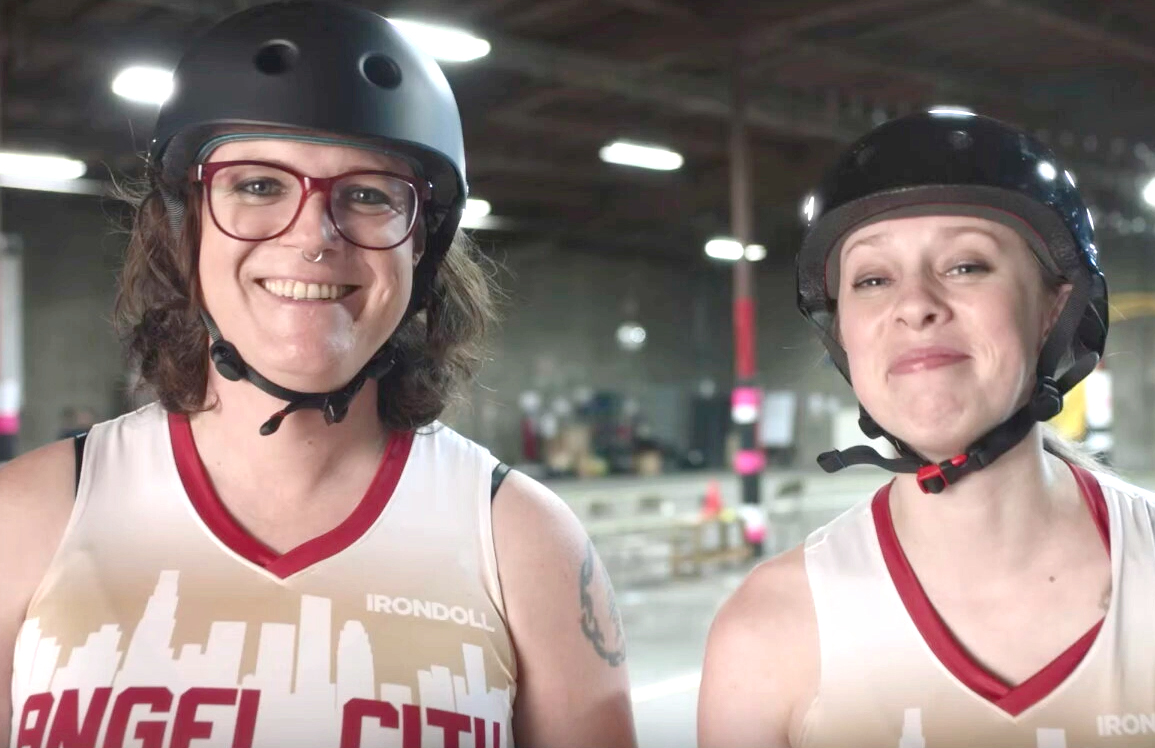 With little fanfare, a real male-to-female trans woman appears as a parent for the first time in a commercial. The #RealMoms ad from Baby Dove challenges what moms should look like, and also includes a rock climber, a cattle rancher, a break dancer, and a single mom.

“We are both his biological parents,” Shea, a real-life mom, says in the ad as she cares for her newborn son with her female partner/wife. “You get people who are like, ‘What do you mean you’re the mom?’ We’re like, ‘Yep.’ ’’

A closing shot includes Shea and her significant other wearing black helmets and Angel City Derby Girls uniforms on the court.

Dove writes on YouTube: “Meet #RealMoms whose diverse parenting styles shatter stereotypes about motherhood and prove that there are no rules about how to be a parent today. From Cassidy, who is raising her son on a cattle ranch, to Elise, who brings her daughter to breakdance battles – we’re so inspired by moms around the country who trust their way.”

The commercial follows up on Dove’s #RealBeauty campaign featuring full-bodied women that challenged stereotypes about what women should look like.

While commercials have historically misrepresented drag and cross-dressing men for humor, in recent years trans male-to-females are starting to get a little respect. That said, female-to-male trans people generally remain rare except for ads from Google Business, Honey Maid and Viacom’s Logo channel (below).

This ad is a real-life story of a young Indian woman named Gayatri. She describes in narration how she was once an orphan as she rides home on a bus. Her adoptive mother, Gauri, loved and cared for her, pushed her academically to become a doctor and spent time with her eating favorite foods and watching horror movies. All this time, Gauri is not shown until the end, when we can see that she is a male-to-female transgender woman. “Isn’t she lovely?” Gayatri asks the listener.

Emphasizing the diversity of its makeup colors, L’Oreal interviews many models of varying ethnicities, including transgender model Hari Neff, who announces that she is Eastern European. Neff reappears and says the signature line for L’Oreal: “Because I’m worth it.”

Featuring the song “Beauty in the World” by Macy Gray, the ad is introduced with the text, “This holiday season, we brought together a group of people who are making a difference in the world. This is their vision of hope, peace, and beauty.”

Then a little girl (elementary school student Zea Bowling) is seen holding out a gay pride flag to someone at a rally. A young transgender woman (Jazz Jennings) gives a speech at a Human Rights Campaign event. The closing text says, “When the world seems divided, coming together can be a beautiful thing. Spread harmony.”

Typically, Valentine’s Day ads focus on couples but this one instead asks that viewers “think of love differently.”

In a series of self-shot webcam movies, a gay teenager tearfully comes out to his mother in their kitchen, who immediately wraps him in a hug: “You gay? It’s OK hun, I knew you were. I knew you were, hun.”

A young transgender man thanks his mother on their couch for her understanding and says, “I think I’ve opened up to you and dad a lot more since I’ve transitioned.” His mom says, “You have to realize as a parent, there is nothing that I wouldn’t do for you.”

And a lesbian asks her grandmother, “You knew? The whole time? And you’re OK?” “Nothing would stop me from loving you my dear,” the grandmother replies.

Transgender teen YouTube star Jazz Jennings, 14, stars in this spot as part of the #SeeTheRealMe campaign, which asks people to share their personal coming-of-age stories through social media. “I was a girl trapped in a boy’s body. Growing up has been quite a struggle being transgender — especially in middle school.” She adds, “Sometimes, I’ve even been called an ‘it.'” ” Jazz ends with, “The real me is happy and proud to be who I am. And I’m just having fun being one of the girls.”

The video begins by featuring YouTube blogger Jacob Wanderling, who recounts his story of being raised by an uncle and always wishing he could be more masculine and have a muscular body.

Jacob tells how he went to Mexico for surgery on his chest, and then started building the body he always wanted at City Gym in Kansas City, Missouri.

City Gym owner Hailee Walsh says she uses Google Business to ensure people know that her gym is open to all and runs a dedicated class for transgender men to work out together.

A slide show displays various images of two individual girls as they grow into women. Each girl’s name is below her respective picture throughout the progression. Eventually, we learn Elizabeth is transgender, and she becomes Ethan. After the most recent shots of Stephanie and Ethan, a picture of the couple embracing each other in the present is shown. http://www.adrespect.org/common/adlibrary/adlibrarydetails.cfm?QID=2588&clientID=11064&ThisPage=Adlibrary

Trans people have also gotten portrayals overseas much earlier than in the US in South Korea, Spain, and the UK:

In this quiet ad, transgender model Harisu sits on a chair with a plain background and smiles. She whispers the first line of a children’s rhyme that means “a monkey’s rump is red.” Later the camera shows closeups of her hands and a swallow of her Adam’s apple. She giggles as the ad closes, and says in a child’s-level Korean, “Understand?”

Set in a hospital, a woman returns to her bed from a gurney, having just had an operation. When she’s ready to leave, she looks at her ID card, which has the name Jose Felix Torres. She burns it and smiles. The tagline then appears: “Redecorate your life.”

This British ad follows an old-fashioned Checker taxi driver in NYC as he nearly runs over a wealthy elderly couple to pick up a sexy, young lady (played by NY drag queen Zaldy).

She gets into the back of his cab and he grows increasingly hot for her, watching her in the rear view mirror. But then she pulls out an electric razor to clip the after-five o’ clock chin stubble and the driver nearly loses it.

The cab screeches to a halt and she exits confidently. The closing words in rainbow colors say, “Cut for men since 1890.” Although the closing line indicates the jeans are “for men” the young lady doesn’t present as a drag queen

In a scene that appears as if from the cutting-room floor of “Priscilla: Queen of the Desert,” a tour bus comes to a stop and a Terrance Stamp look-alike in drag steps into a roadside bar.

Everyone turns to look at the elegant doyenne, who asks for the ladies’ bathroom. The male bar patrons look surprised but interested, then the drag queen gasps at the sight of the filthy restroom. Out of her clutch she pulls the cleaning spray and–in an instant–the room is sparkling clean. As she returns to the bus, a counterpart in bunny ears asks, “Nice ladies room?” Her response is “Fit for a queen.”